UPGRADE YOUR RUN: 7 EXERCISES FOR RUNNERS 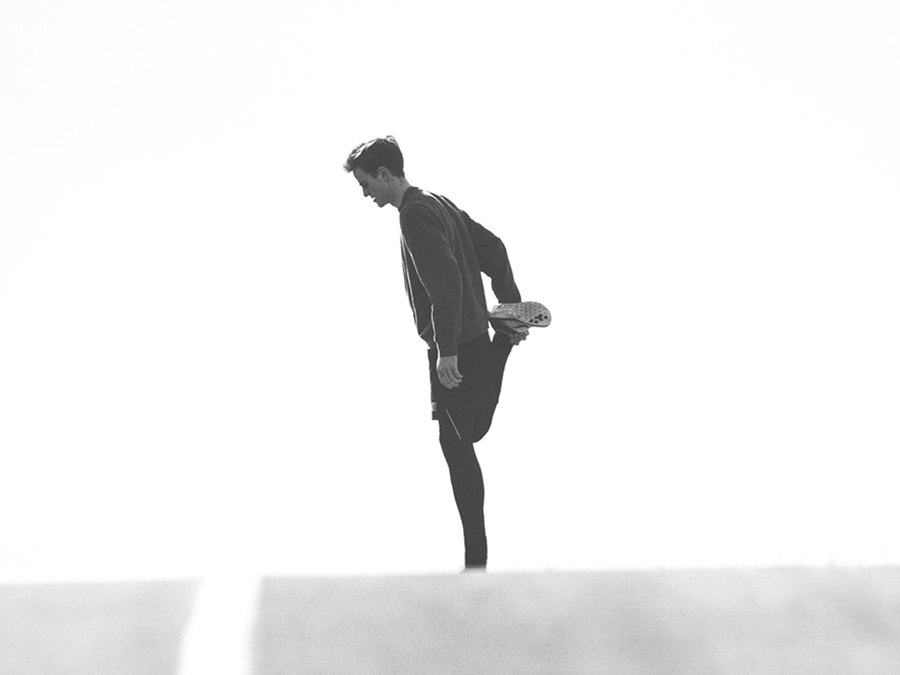 Running is a great way to clear your head and work on your endurance. If you want to make more progress than you have until now, you should get a full-body workout into your running training routine. We’ve summarised seven easy exercises you can do to improve your running performance. As the motto “Upgrade Your Run” suggests, these exercises were specifically created for runners. All you need for this workout equipment-wise is a resistance band, like the Blackroll Loop Band, and a rope, like the Schildkröt skipping rope. We hope you enjoy looking through and doing these exercises with us. Let’s go!

Place the band just above your knees and move into a squat while keeping your torso as straight as possible. It’s important to not let your knees go over your toes and to put your weight on your heels. While keeping the resistance band tense, take ten squat steps to the right. Your feet should be kept at least hip-width apart throughout the exercise - wider if possible. This will keep the resistance band tense and will give your thighs an amazing workout. Tip: The lower you sink your hips, the more you're working those muscle groups. Change sides as many times as you can within 60 seconds and repeat the exercise three times. Take a 15-second break between sets. > 3 sets of 60 seconds, 15-second break between sets.

Hold a skipping rope handle in each hand and stand in front of the rope. As you jump, cross your legs in the air. Alternate legs every time you jump and jump as many times as you can within 45 seconds. Alternate between landing with your legs crossed and your feet apart. Keep your body tense throughout the exercise. You should jump as quickly as possible. Can you manage to only cross your legs in the air and land with your feet apart again? Repeat this exercise three times and take a 15-second break between sets. > 3 sets of 45 seconds, 15-second break between sets. 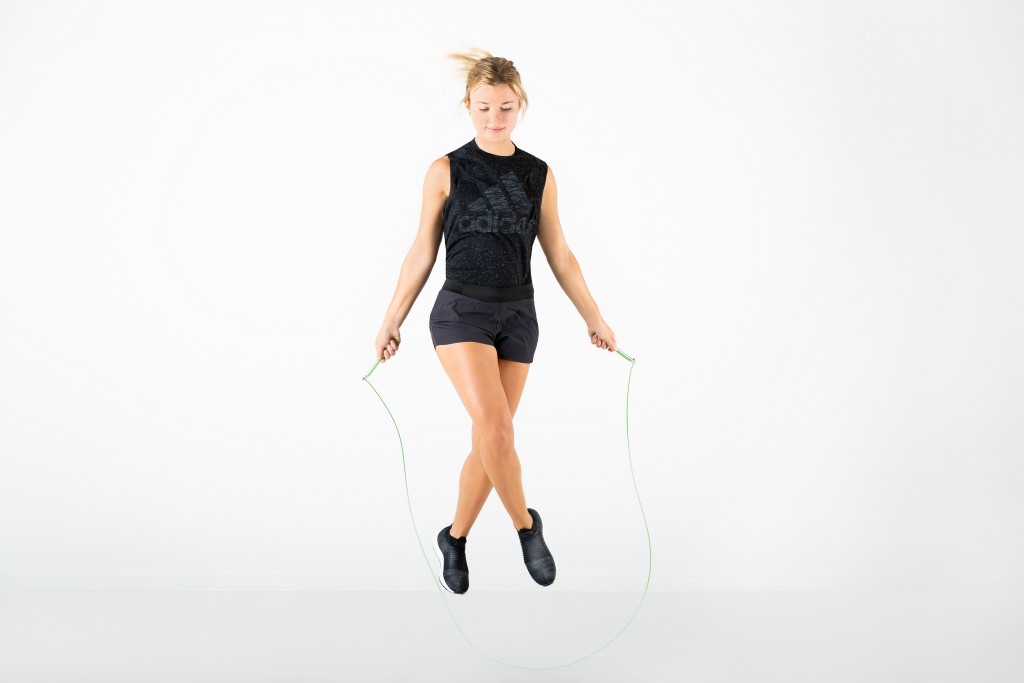 3. Side to side with skipping rope 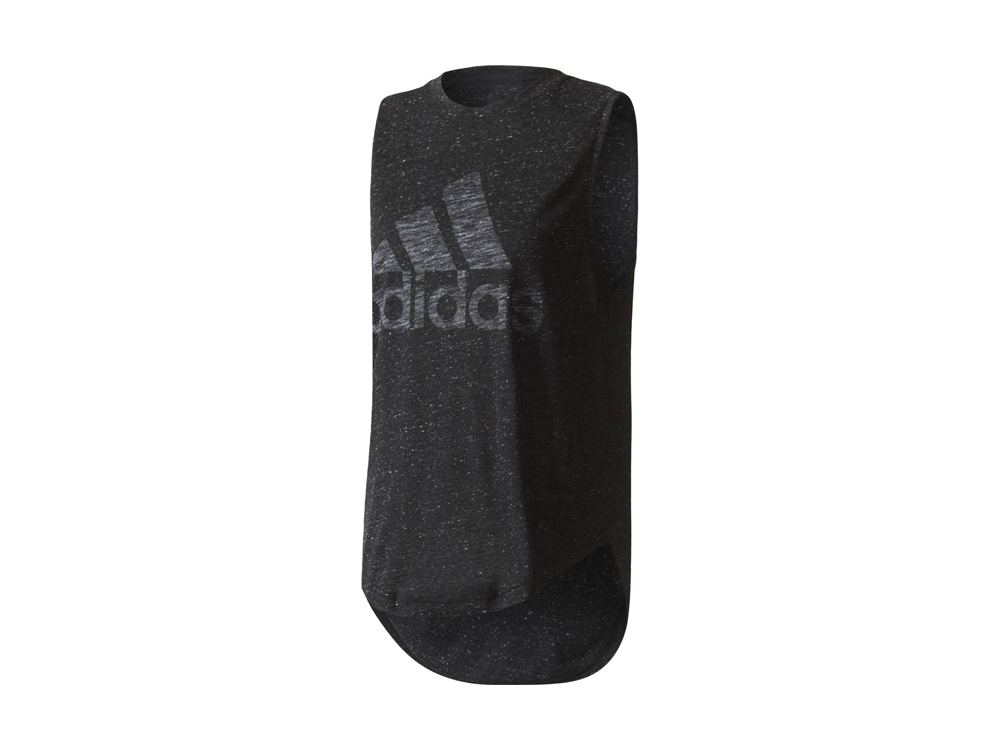 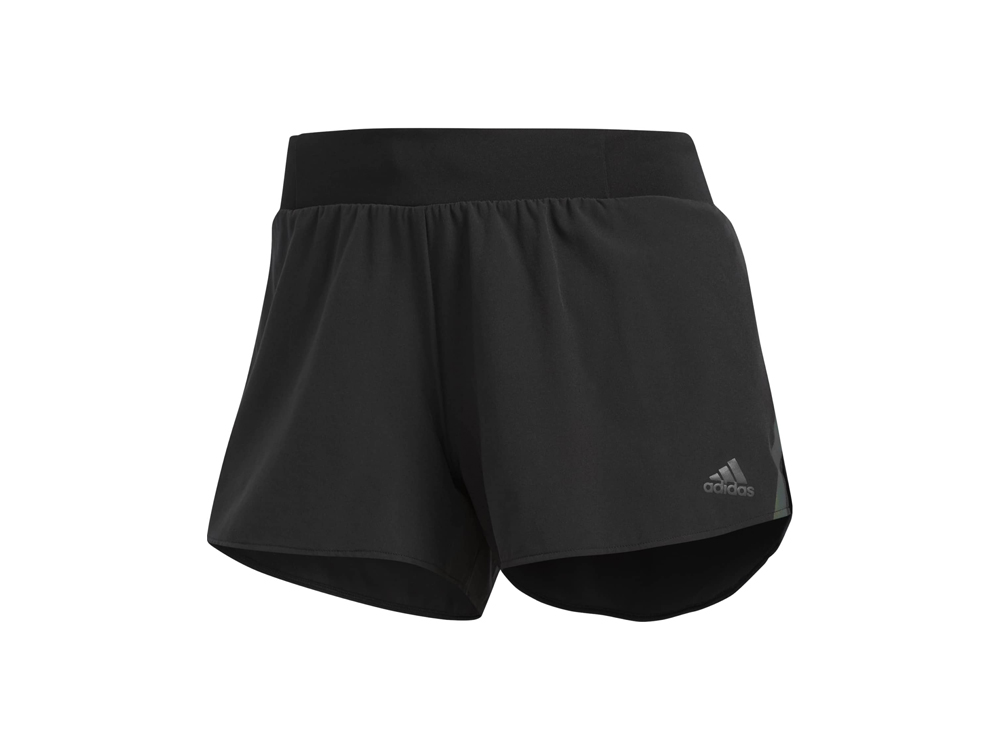 Place the training band around your ankles. Stand with your feet hip-width apart and your torso upright. Keep your hands tensed up in front of your chest. Shift your weight onto your left foot and lift your right foot to the side. Keep your body upright during the lift and push your leg out as far to the side as it’ll go. Slowly bring your leg back down, without letting your foot touch the floor. Repeat this exercise ten times and take a 15-second break between each of the three sets. > 3 sets of 10-15 reps per leg, 15-second break between sets. 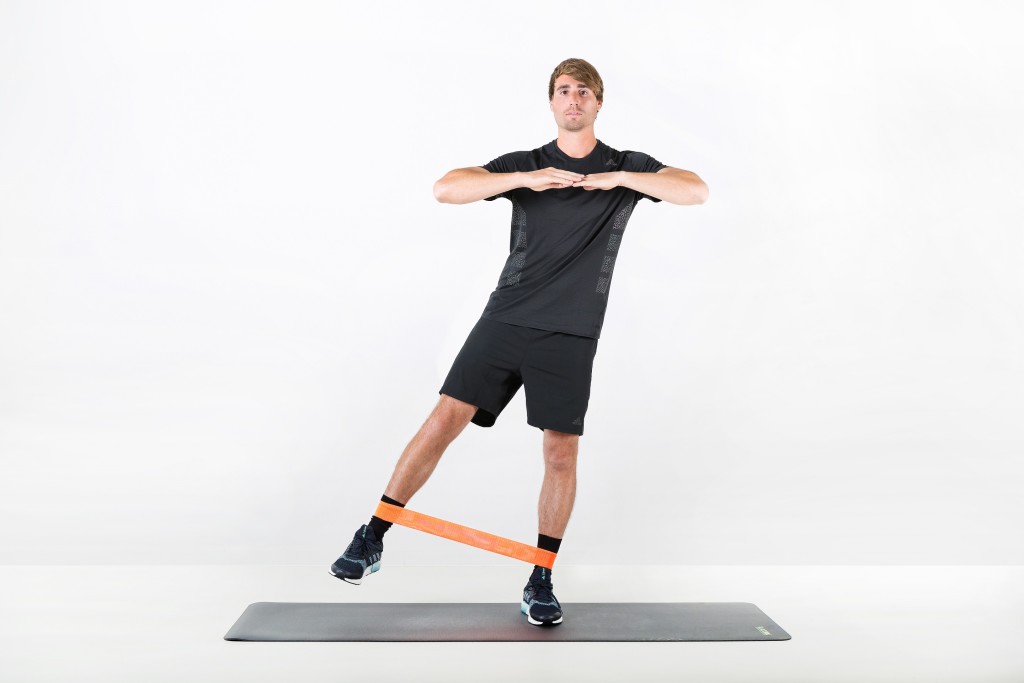 In essence, this exercise consists in getting up from a seated position and then sitting back down on a box, chair or park bench. Place your resistance band above your knees and stand about 1 foot-length in front of your seat. Start with an upright torso and with feet slightly further than shoulder-width apart. Move into a squat until you touch the box but don’t sit down. Keep your weight on your heels and don’t let your knees go over your toes. Stay in this position for a few seconds and then stand back up again. Repeat this exercise ten times and take a 15-second break between each of the three sets. > 3 sets of 10 reps, 15-second break between sets. 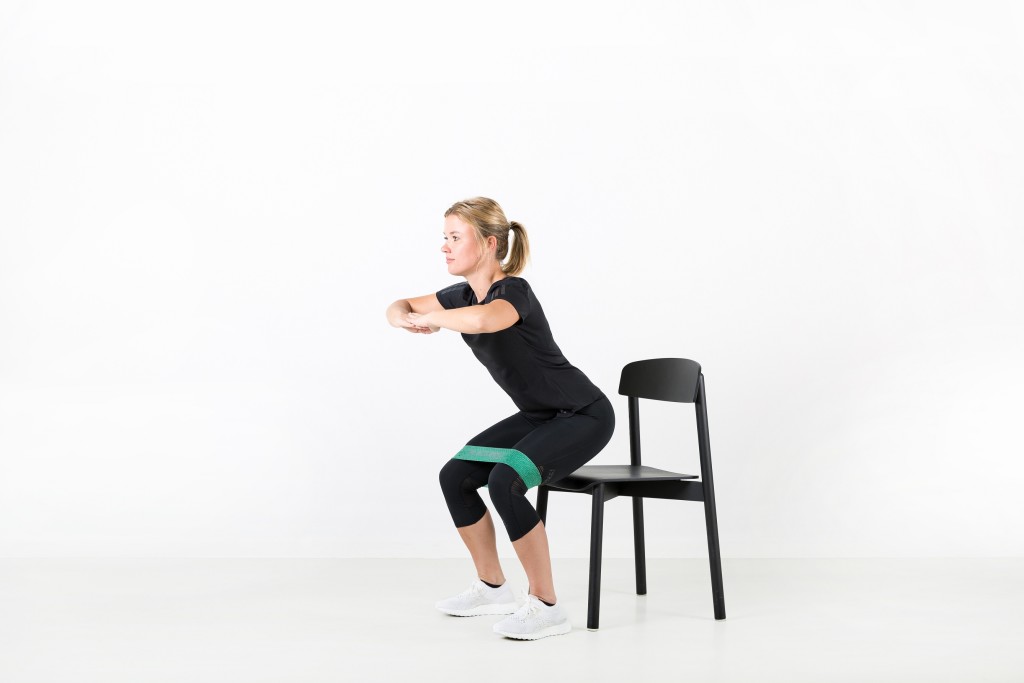 Take the ends of the skipping rope in your hands and stand in front of it. During this exercise, try to jump higher than usual, passing the rope beneath your feet twice per jump. Land securely on your toes and then jump back up straight away to give the rope enough time to pass beneath you two times. Tip: During a jump, let most of your power come from the ankles and toes instead of the knees. That’ll allow you to jump back up much faster. > 3 sets of 45 seconds, 15-second break between sets.

Lie on the floor or on a bench. Place the resistance band just above your knees. Bend your knees, move your feet hip-width apart and keep your arms by your sides. Lift your hips until your shoulders, hips and knees are in a straight, diagonal line. Sink your hips back down without touching the floor. Repeat this exercise ten times and have a 15-second break between each of the 3 sets. => 3 sets of 10 reps, 15-second break between sets. These exercises are a great addition to your regular running training and you’ll soon see results not just in your body but also your running performance. Try the exercises out and let us know what you think of them.
Upgrade your run! Find you newest adidas running outfit here »
Tags: BLACKROLL, BOOKLET#1, FITNESS, RUNNING, SCHILDKRöT, TRAINING, TRAINING TIPS, WORKOUT

GET IN SHAPE WITH THE NIKE SELFIE PACK

THE MOUNTAINS CALL! THE CHOICE IS YOURS: HIKE OR TRAIL RUN?