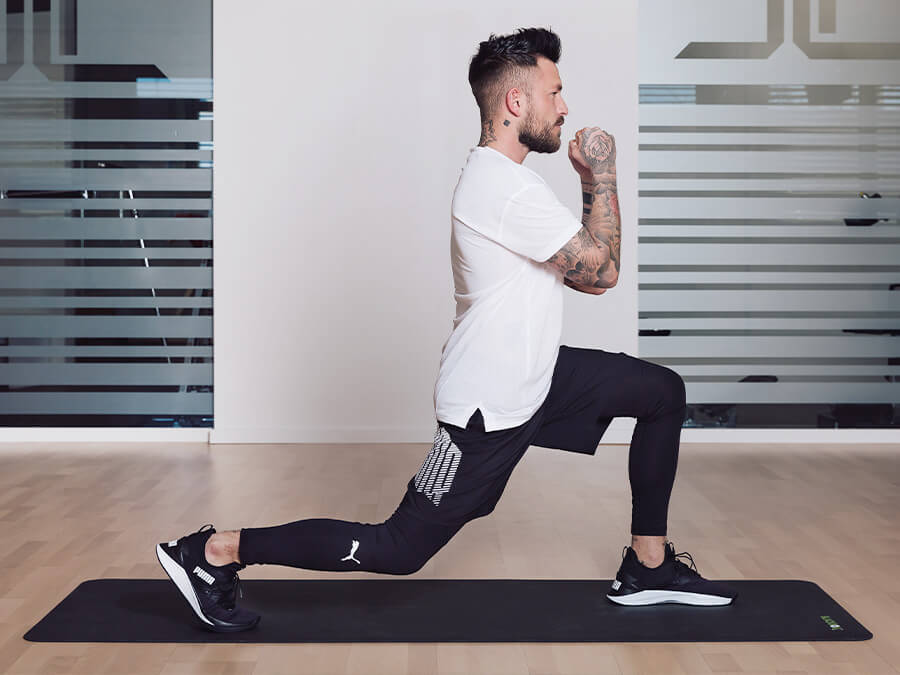 You just need to look out of the window to see spring is right around the corner. It’s something we all love, but it’s especially good news for running enthusiasts as it officially signals the start of the outdoor running season. Finally being able to run outside in spring temperatures is much nicer than having to face the snow, ice and sub-zero temperatures in winter. If you want to be ready for running this spring, you should start preparing now. Including checking your running gear. Does everything fit? Is everything ready to go? Proper training is just as necessary as good equipment though. According to several studies over the past few years, runners can also greatly benefit from strength training. So, we want to introduce our workout with seven simple but effective exercises. It primarily focuses on the muscles used during running and is based on functional training. 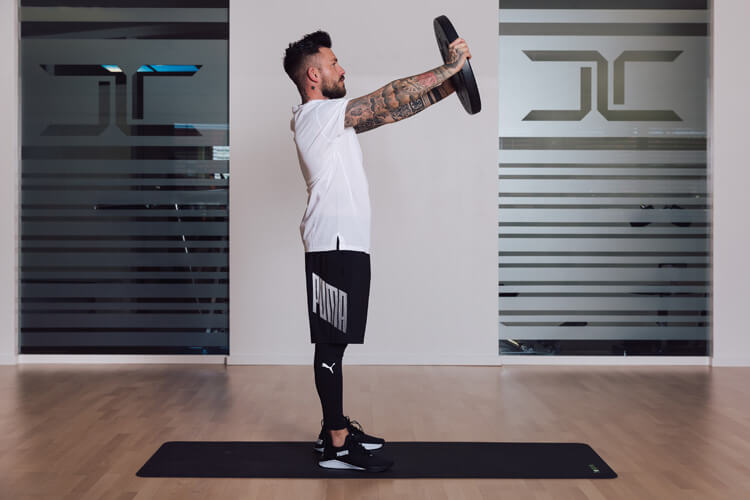 What is functional training?

Functional training is a training philosophy that became part of rehabilitation and elite sports a few decades ago. Though it has only really become established in the field of mass sports in the last few years. The basic idea behind it is a simple as it is obvious: training only one muscle at a time during exercise is not really effective. However, functional training always aims to train several muscles or even muscle groups simultaneously. Training focus then shifts from the isolated muscle to complete movements. Functional training is not generally limited to a specific type of sport.

Why should runners do strength training at all?

On the face of it, many running enthusiasts don’t really think that strength training and running go together. An understandable view for traditional strength training, which often only focuses on training a single muscle. But in the context of functional training, runners do indeed benefit from strength training. In essence, it’s more than increasing one’s own level of performance; it also aims to promote balance, stability and economy of movement. This is exactly what is so interesting for runners – a combination of muscle building and the right strength training does more than improve stability of the torso and essential joints. Other key areas such as flexibility, coordination and balance also benefit from the appropriate exercises; vital for the constant sudden changes of movement and load legs undergo during running. The result: an optimised running style, which in turn leads to better running performance. 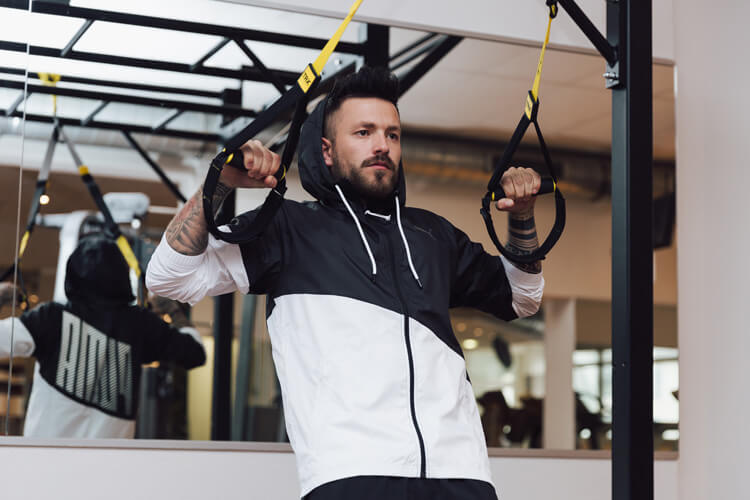 Which muscle groups are particularly important for runners?

Functional training is a cross-sports activity, but some muscles and muscle groups have a particularly vital role to play in running. Running enthusiasts should therefore focus on these areas and use appropriate exercises to train them. Unsurprisingly, legs, hips and buttocks are essential for running, so runners should incorporate these into their strength training programme. A stable upper body musculature is crucial for a number of things, such as an efficient transfer of energy and significantly helps to achieve an optimal running form. Runners should also target abdominal and trunk muscles during strength training, which helps cushion the inevitable impact of running, reducing the strain on the body and minimising the risk of injuries.

But before starting with strength and running training, top of the list is the warm-up. This is very straightforward with simple, classic Jumping Jacks. You still need to take care that you do this correctly. Start by standing upright with your arms extended and the palms of your hands facing forward. Feet are close together. Now, move your legs a little wider than shoulder width and at the same time move your arms upwards, stretching them out so that they meet above your head. Then, jump back to your starting position. Many runners find three sets of 10 to 15 repetitions the ideal way to prepare for their workout. Jumping Jacks are great as a warm-up to running and strength training as they prepare practically every relevant muscle groups for the upcoming workload. They also stimulate circulation, increase oxygen uptake and thus performance.

Start with your left leg angled at almost 90°. Then, move your right leg backwards into a lunge without your knee touching the ground. Drive through into a jump and bring the right leg up in front of your abdomen. Then land in the lunge, watching your balance. Keep your torso as still as possible during this exercise. To help maintain body tension in the air, keep your left arm parallel to the right leg at the front. Repeat this exercise and do three sets of ten. ‘Lunge High Knee with Jump’ increases your explosive power so you can drive through more explosively while running and strengthen trunk and leg muscles at the same time. 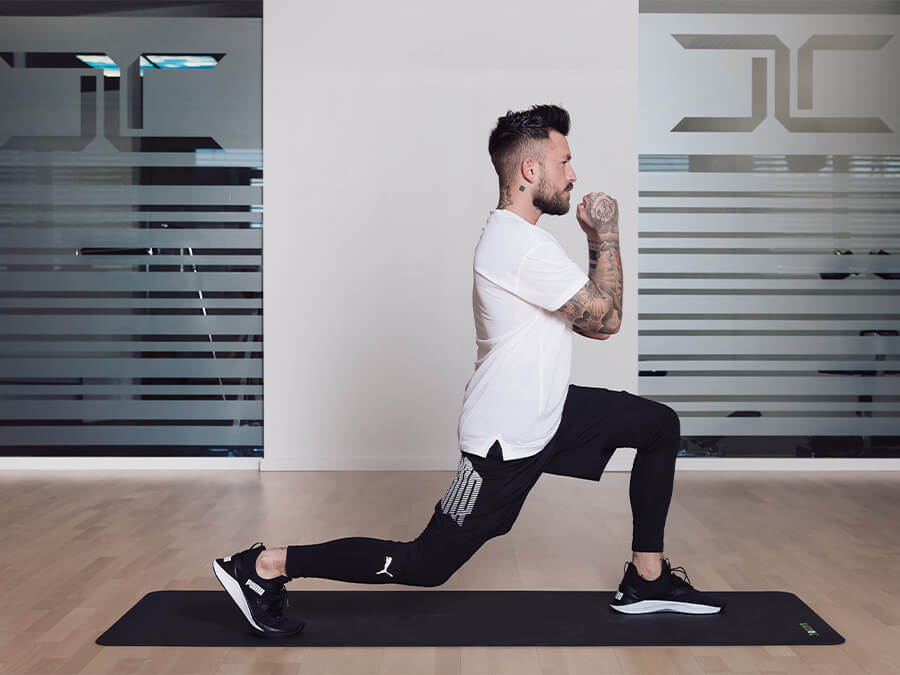 This exercise begins by standing with legs shoulder-width apart. Now squat deeply with your arms outstretched forward. Body weight should rest on the heels and the knees should not be over the toes. Now drive through explosively and jump straight up, quickly moving your arms backwards. A stable upper body is also key here. Repeat three sets of ten. ‘Squat Jumps’ not only improve your explosive power, they also help train your leg and buttock muscles.

Stand with your feet hip-width apart, then shift your body weight to your right leg. Now move your left leg backwards at an angle and go lower and lower into a squat until your left arm touches your right toes. Your left leg should never touch the ground. Now return to your starting position and repeat the movement doing three sets of five for each leg. ‘Single Leg Toe Touch’ strengthens the muscles in the buttocks and thighs and improves balance. 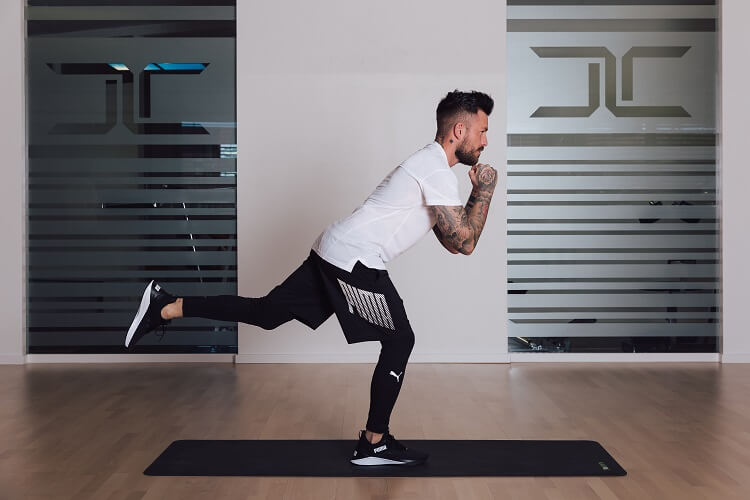 Start on all fours so that only feet, shins, knees and hands touch the ground. Make sure that your knees form an extension of your hips and that arms are under your shoulders. Keep your back straight. Now lift your right arm and left leg in a straight line at the same time and hold the position for five seconds. Maintaining balance and controlling body tension is important. You should also repeat this exercise and do three sets of five for each side. ‘Quadruped Diagonals’ improves balance and trains your core.

Start in the side plank position, prop your body with your elbow directly under your shoulder and your legs in the scissor position. Legs, hips, back and shoulders should form a line. Now tense your body and keep your upper arm angled next to your head. Then move your upper angled arm and the upper part of your leg towards each other until they touch. Hold each position for three seconds and then return to the original position. We also recommend repeating this exercise and doing three sets of five per side. More advanced athletes can also stretch the lower arm. ‘Dynamic Side Planks’ are ideal for training muscle groups in the core of the body, abs and back. The exercise also improves balance and stability.

Start this exercise in the plank position. Tighten your abs, back and buttocks. Move your right leg up from the floor and again make sure that your body forms a line. Hold this position for three seconds, return to starting position and change leg. Again, we recommend repeating the training exercise in doing three sets of five per side. ‘Plank with Leg Lift’ trains not only the core but also the leg muscles.

Start in the classic push-up position. First, bend your arms until your chest almost touches the ground. Then push yourself back up into the plank, spread your legs with a jump and then jump back into the starting position. During the exercise, the body – especially abs, back and buttocks – should always be kept tight and form a straight line. It’s best to do three sets of ten. ‘Push-Up & Plank Jump’ increases your explosive power and improves physical coordination. It also strengthens your core.

The opposite of the warm-up before sport is the cool-down afterwards. The aim is to prepare the body for ‘normal mode’ again after exercise. This not only relaxes muscles and prevents muscle soreness, but is also good for the cardiovascular system. When cooling down, we recommend stretching muscle groups that have been worked particularly hard and/or ease the running pace. An effective cool-down does not have to last longer than a few minutes.

If runners follow some basic tips, running and strength training combined will undoubtedly lead to success. Doing the workload in doses is key. Some recreational athletes do too much, especially at the beginning of spring. That’s why it makes sense to work out, slowly increase your running distance and intensity and also take days off to regenerate. It’s always a good idea to introduce some variety as then you won’t lose motivation and training won’t become boring. So, it makes sense to ring the changes by modifying exercises and running different terrains and different distances. Make sure to check your gear, especially after the winter. For example, heavily used running shoes may already be past their best and won’t be able to support joints or cushion impact optimally. Then it’s time to say goodbye even to our beloved sports shoes. 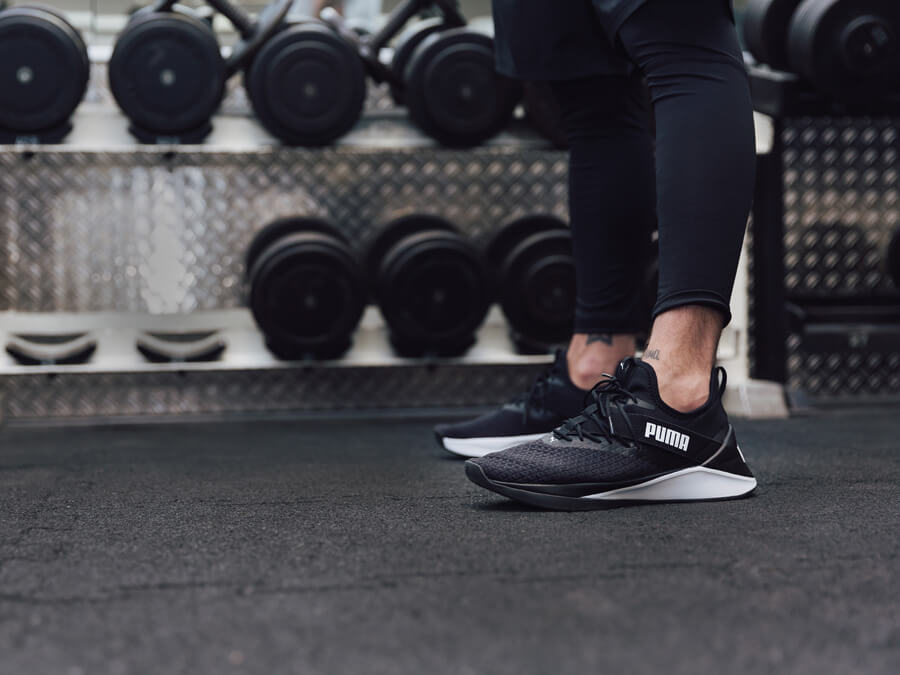 With the seven simple exercises listed here, anyone can do an effective workout in addition to running. The best part is, you don’t need any equipment. This means you can do the workout anywhere, anytime. Moreover, the exercises don’t even take up all that much time. So, saying ‘I don’t have time for strength training’ just doesn’t wash. =) Strengthening your muscles and your legs will take you further and faster than ever before. A strong back and abs provide additional stability. The exercises also prevent pain or injuries during and after running. You might not believe it at first, but running also puts a strain on the upper body. Prepare yourself properly beforehand. Other than that, you can start running straightaway using our workout and tips. So, head out and off you run. Have fun!
Discover now our latest training gear »
Tags: FITNESS, PUMA, RUNNING, TIPS, TRAINING, TRAINING TIPS, WORKOUT

NO MORE EXCUSES! HOW DO YOU MOTIVATE YOURSELF FOR EXERCISE BEFORE OR AFTER WORK?

HOW TO GO ABOUT HAVING YOUR FIRST TRAIL RUN