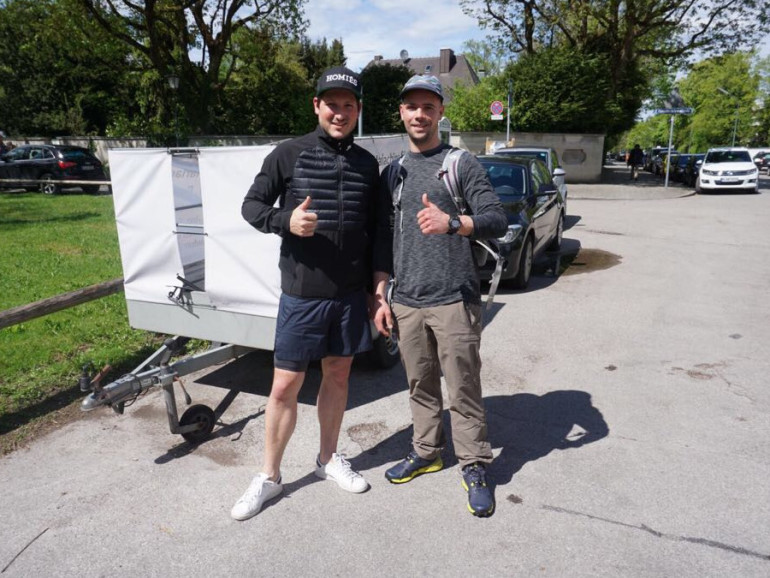 A few weeks ago, André and Roland of the Keller Sports Team as well as some members of the Isar Run by Keller Sports took part in the very popular Megamarsch 2017 in Munich. They set themselves the challenge of running 100 k to Mittenwald in 24 hours.

Roland tells us about his experience. Did he make it to Mittenwald? 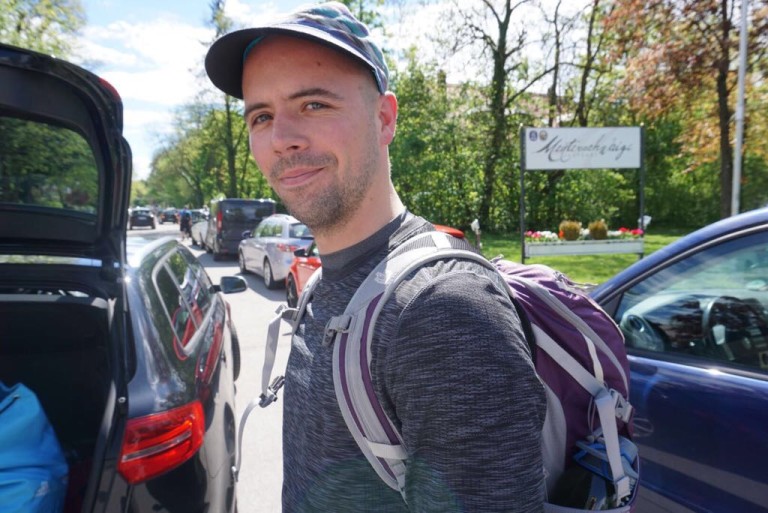 “We set off from Gutshof Menterschwaige in Munich. The first 15 k along the Isar were beautiful. It was sunny and 20 degrees and the paths were good, so we were off to a great start. We were two of approx. 1,000 adventurous participants making their way to Mittenwald. We then followed the Jakobsweg way up to the first supply point, 22 k into the run. We only stopped there briefly to fill up on energy bars, bananas and water. From there we continued towards Wolfratshausen.

The rucksacks that The North Face provided us with for the Megamarsch offered very cleverly organised storage space and we made the most of it. The bags were full to the brim with provisions, shoes and clothes but were still comfortable to wear and didn’t move around or press uncomfortably. 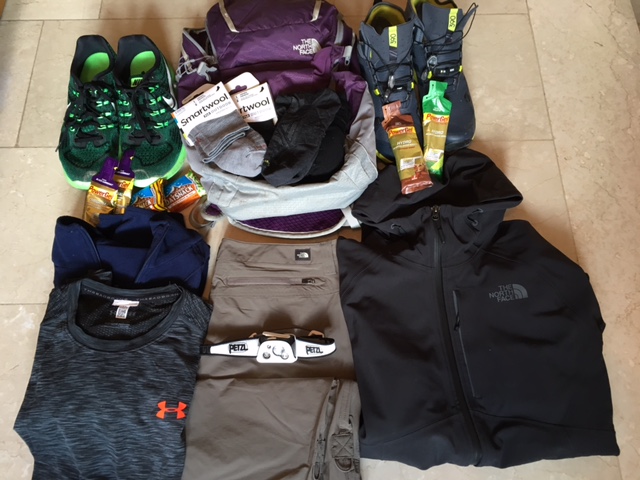 Having passed Gelting, around 30 k into the run, we came across a party somewhere in the woods and ran along to the sound of nice electro music for a while. At this relatively early point in the challenge, André and I both noticed our muscles slowly starting to pinch. The last 10 k before the second supply point in Faistenberg bei Eurasburg (42 km) were still very smooth though. We arrived at the point just after 12. We were replenishing our stomachs and our stocks when we found out that a bus was running from there to Wolfratshausen. After some thought, we decided to pass on the ride back and get the next 20 k to Kochel under our belts too. 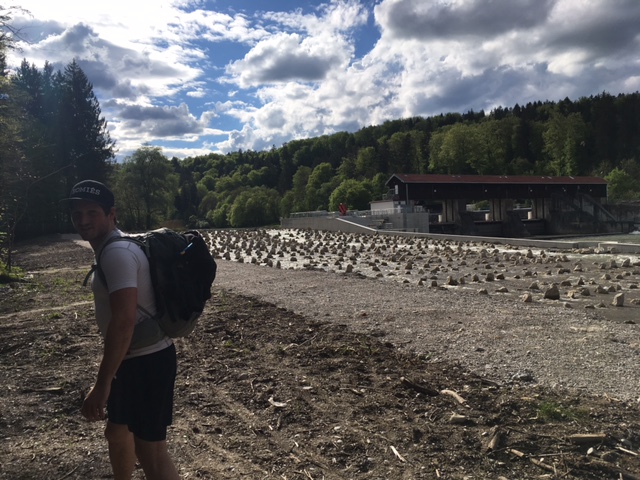 As we’d been running mostly on tarmac up until that point, we thought it best to change from waterproof hiking shoes into running shoes. That turned out to be the wrong decision. The temperatures started falling, so we had the chance to use the Apex Flex for the first time (also provided by The North Face for the Megamarsch). The jacket impressed us both with its great fit and high quality.

We made our way towards Kochel and the third supply station. After just a mile we got to test the North Face Apex Flex in extreme conditions - it began to rain quite hard and we were soaked through within minutes (apart from our upper bodies and rucksacks). The GoreTex membrane in the Apex really did hold true to its word. At this point, we decided to change our shoes again. We were stood in wet-through running shoes in Maxkon, near Penzberg (approx. 50 km). It was around 3 pm, under the shelter of a bus stop, that we changed out of our soaked running shoes and into our hiking boots. Unfortunately, this shoe swap meant that, for me and my swollen feet, that 3.5 k to Penzberger bus station were the last I would run in this year’s Megamarsch. 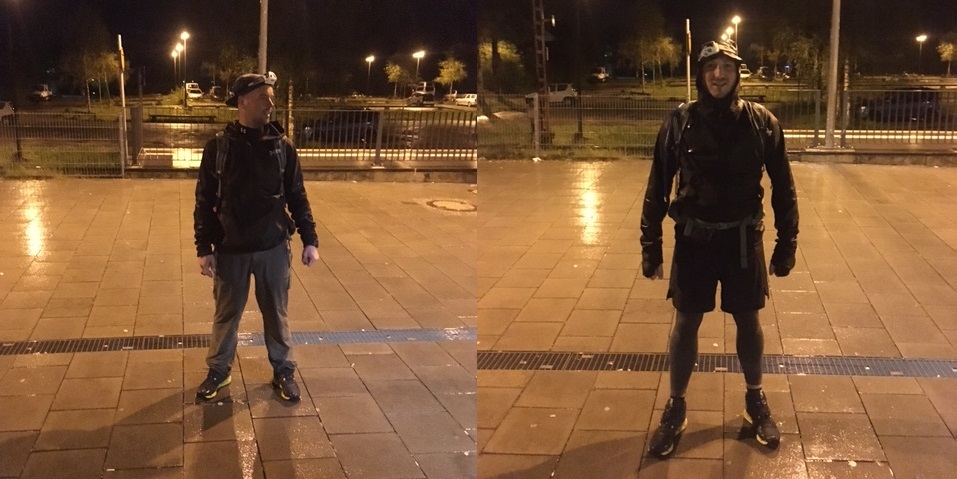 Those last 3.5 k were the toughest of the day and when we arrived at the Penzberg bus station we were absolutely defeated. After 4 hours in the continuous rain, our run ended at 4.30 pm, kilometre 55. Although we were disappointed that we didn’t even get to the third supply point in Kochel, André and I agreed that this wasn’t our last attempt at running the Megamarsch. We’ll take this year’s experience and use it to prepare better for next year’s run, so we can improve on what we’ve already achieved”. 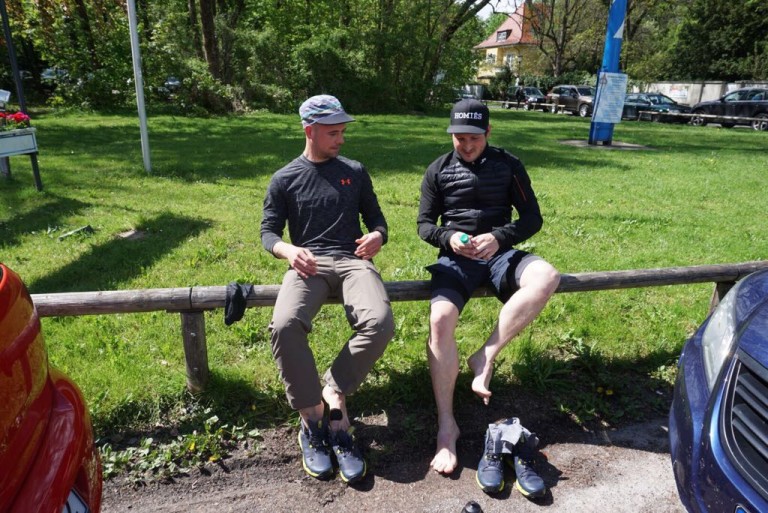