THE NIKE ZOOMX VAPORFLY NEXT% IN THE TEST 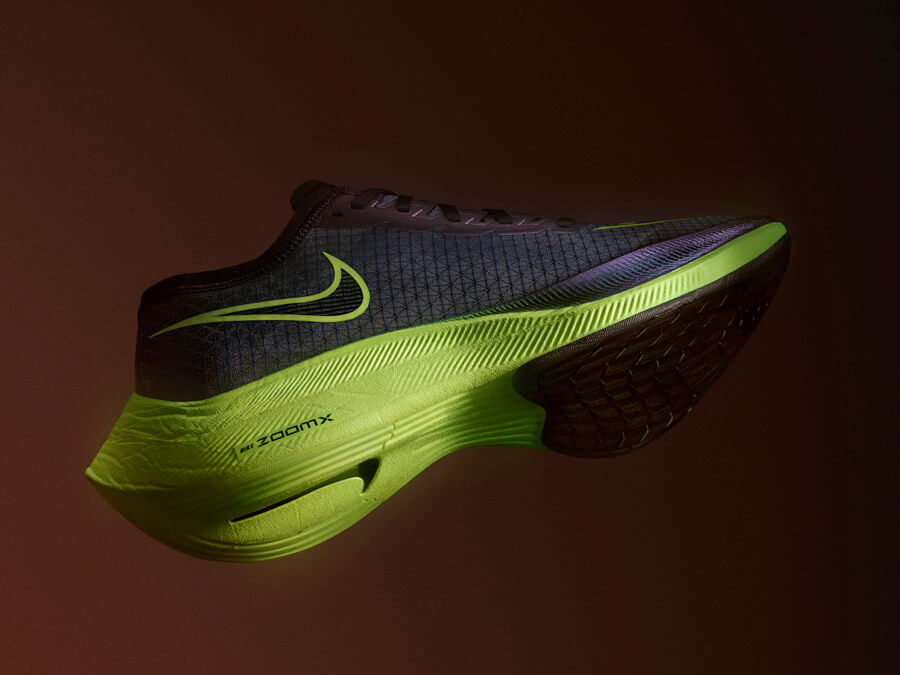 Much has already been reported about its predecessors, the Nike ZoomX Vaporfly 4%. Many victories were celebrated with the fastest marathon running shoe, and not without reason. But is it possible to improve on such a successful running shoe? Nike said yes and created the Nike Vaporfly NEXT%. At the pre-launch event in Berlin 2019 (see below), our Keller Sports Pro Jan was able to test the shoe for the first time. Together with Jan Fitschen and Valentin Pfeil, they went out on the track for a short test. 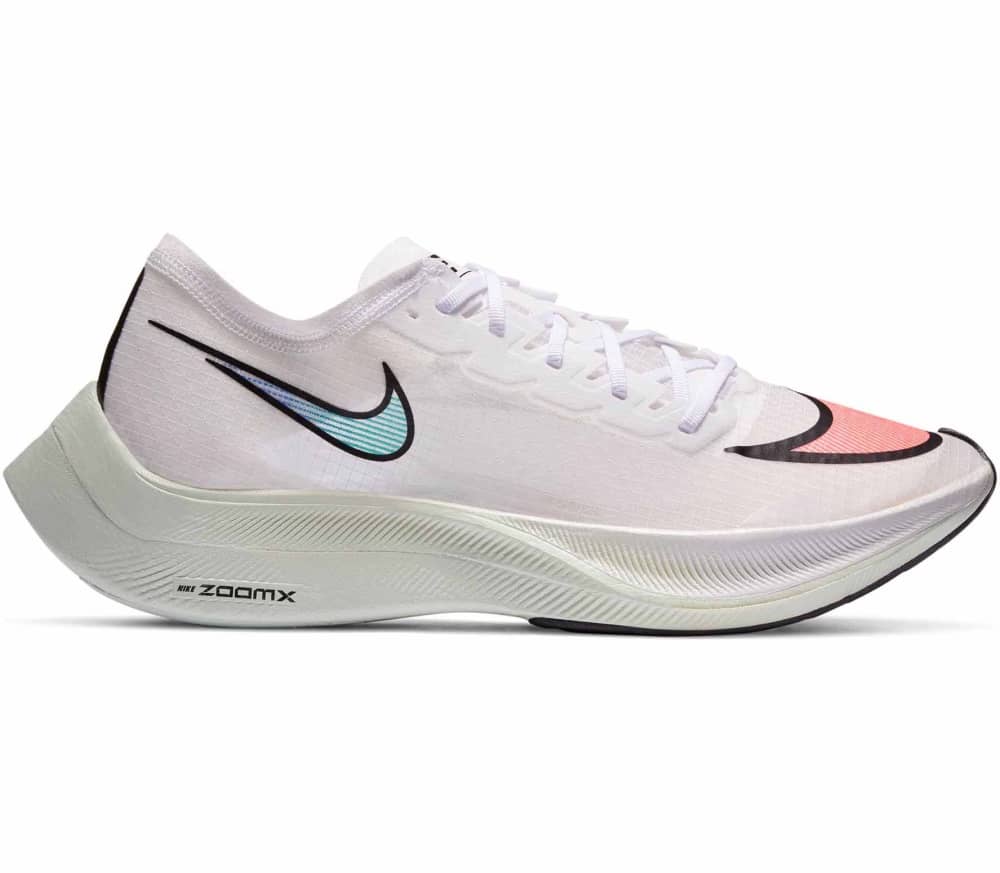 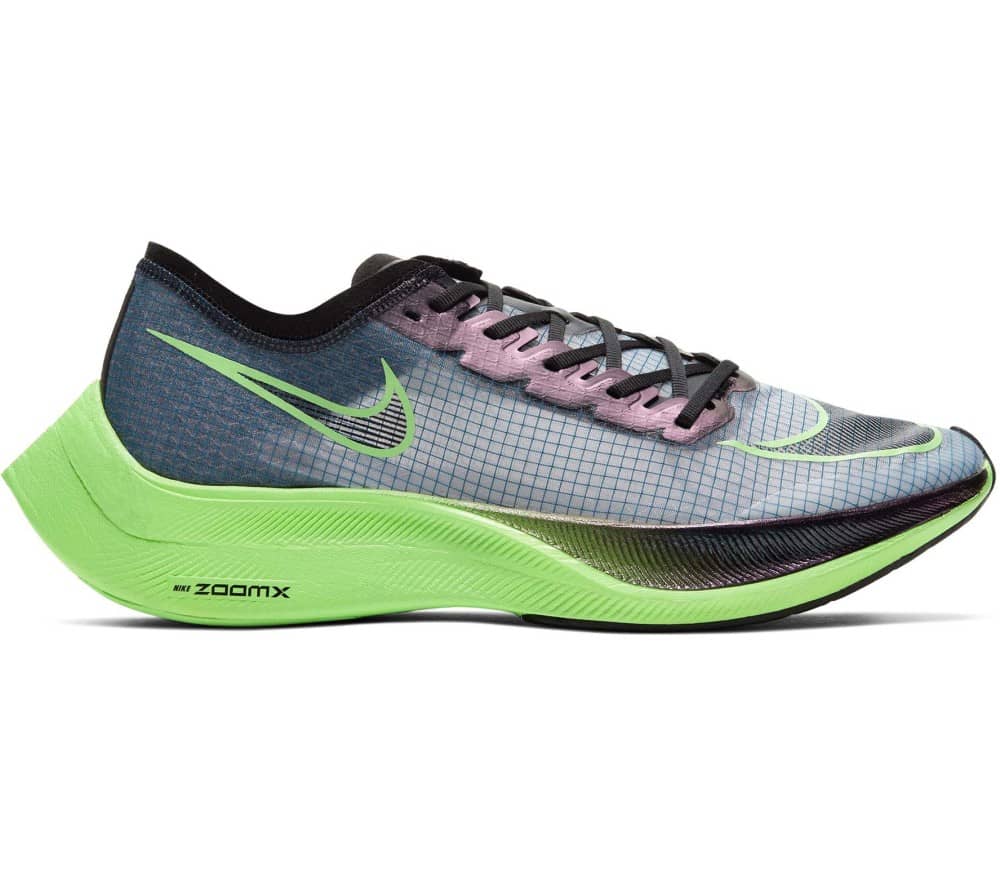 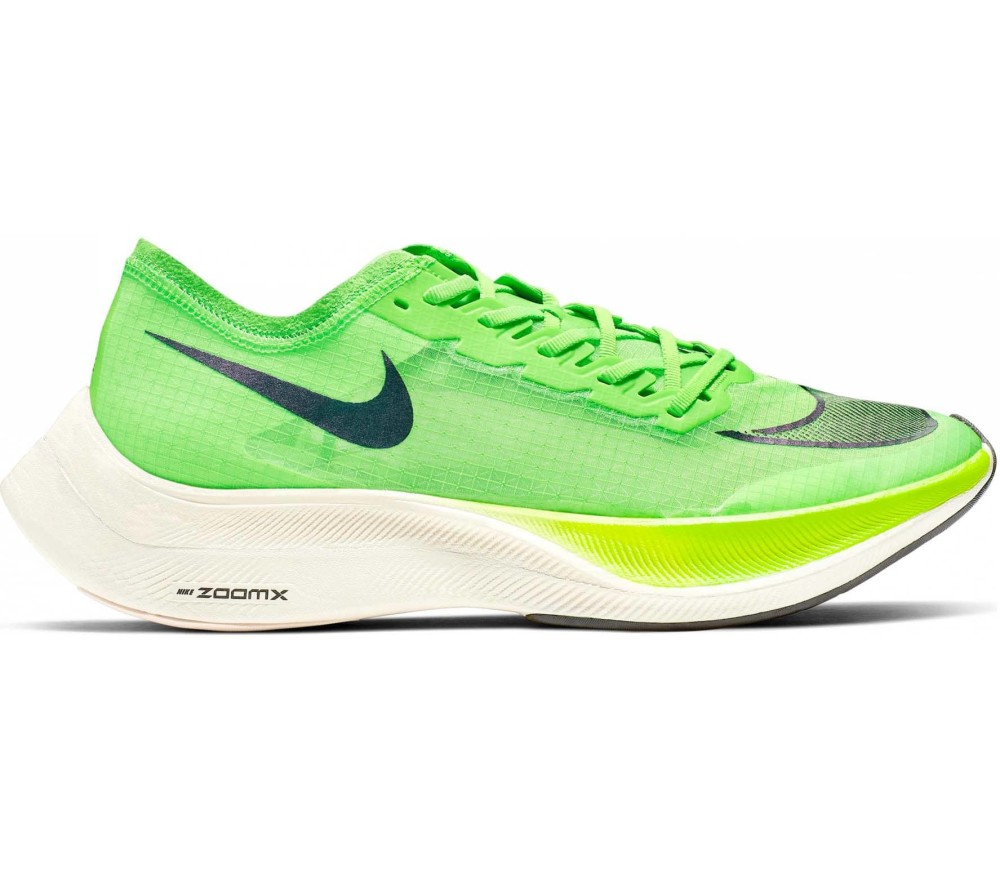 A short time later, he got the new running shoe on his foot again for an extensive test. He put the new Raceday Rocket through its paces. Here he tells us all about the innovations of the Nike ZoomX Vaporfly NEXT%. 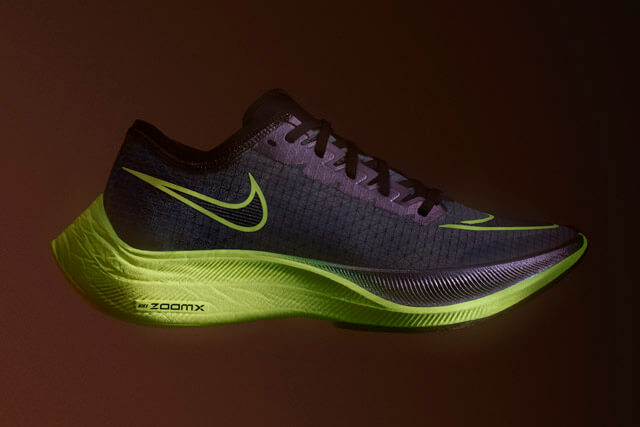 The Nike ZoomX Vaporfly NEXT% in the test

Nike has tweaked a lot of things, but the Next% still has a lot of the DNA of its predecessors.

The structure of the Nike Vaporfly Next%

Let's start with the upper, where it gets the new Vaporweave upper. Compared to Flyknit, this is even lighter and, above all, does not absorb any liquid. Especially during races in the rain, the fit of the running shoe does not change and it does not become heavier.

The lacing has moved a little to the side, which takes pressure off the instep. There is 15% more of the very responsive ZoomX in the midsole. This, in combination with the carbon fibre plate, provides a lot of forward thrust. One of the weak points of the predecessor - the outsole, which wears out very quickly - has been reworked by Nike with a new construction.

The entire forefoot is covered with a layer of rubber, as are the outer sides of the heel. Along the way, the drop has been reduced to 8 millimetres, which benefits running at high pace. 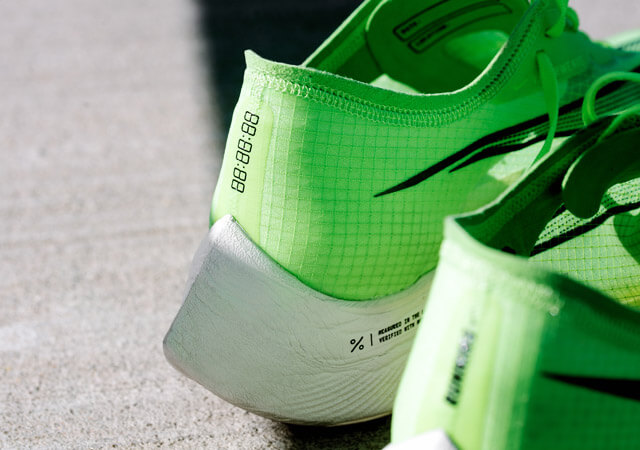 How does the Nike Vaporfly Next% perform?

It's clear: if you have the Nike Vaporfly Next% on your foot, you want to burn top times into the asphalt. This works wonderfully with the latest update of the fastest marathon running shoe. The first time you lace up the shoe, you get the feeling that "today we're going to get down to business!

The lightweight construction of the running shoe fits beautifully on the foot and provides a secure running feeling. The lower drop together with more ZoomX in the midsole makes for a faster run. You are driven to run more over the midfoot and forefoot. This is where the carbon fibre plate provides the extra forward thrust and helps you maintain a high pace.

This effect also benefits a tired muscle, making it easier to master the last kilometres after the magic 36k mark. I was also very impressed by the revised grip, which works really well. This has ensured a longer service life than its predecessors. 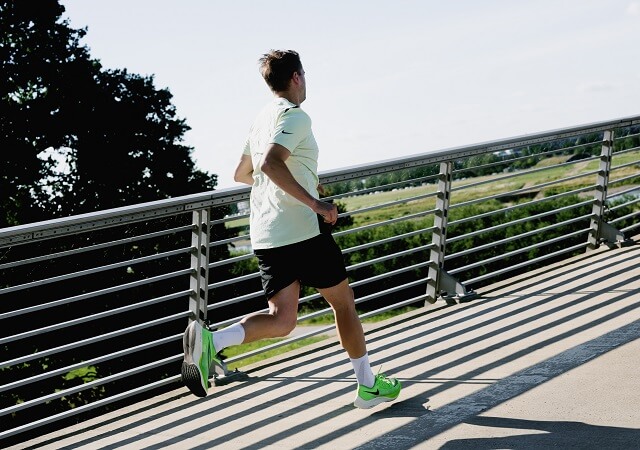 The new Nike ZoomX Vaporfly NEXT% at a glance

The Nike Vaporfly Next% remains one of the best competition shoes on the market. The updates with new upper material and outsole really suit it. They provide a lot of running pleasure in every competition up to the marathon distance. My enthusiasm has definitely been maintained since the first short test in Berlin, and has even increased. 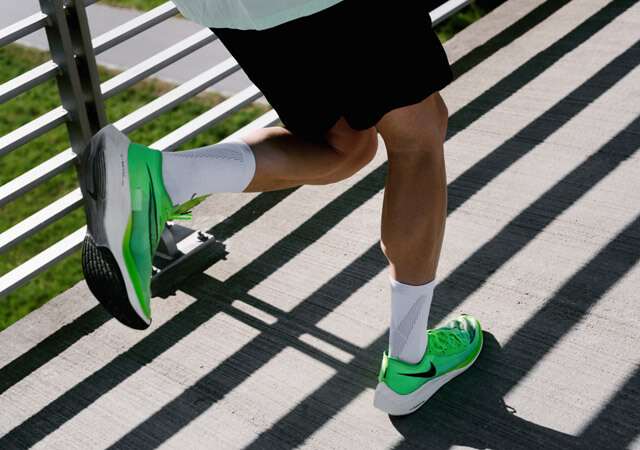 Nike hosted an event in Berlin at the beginning of May 2019 - the agenda was nothing less than "The Future of Running". When it comes to running performance, Eliud Kipchoge naturally comes to mind. In short, the fastest marathon runner of all time. After his world record at the Berlin Marathon in 2018, he recently set the second-fastest time on the asphalt with his victory in London and won the marathon in the English capital for the fourth time in 2019.

His new record-breaking shoe was also presented at this event - the Nike ZoomX Vaporfly NEXT%. During the Nike event, we were able to test the new running shoe for the first time and present it to you here. 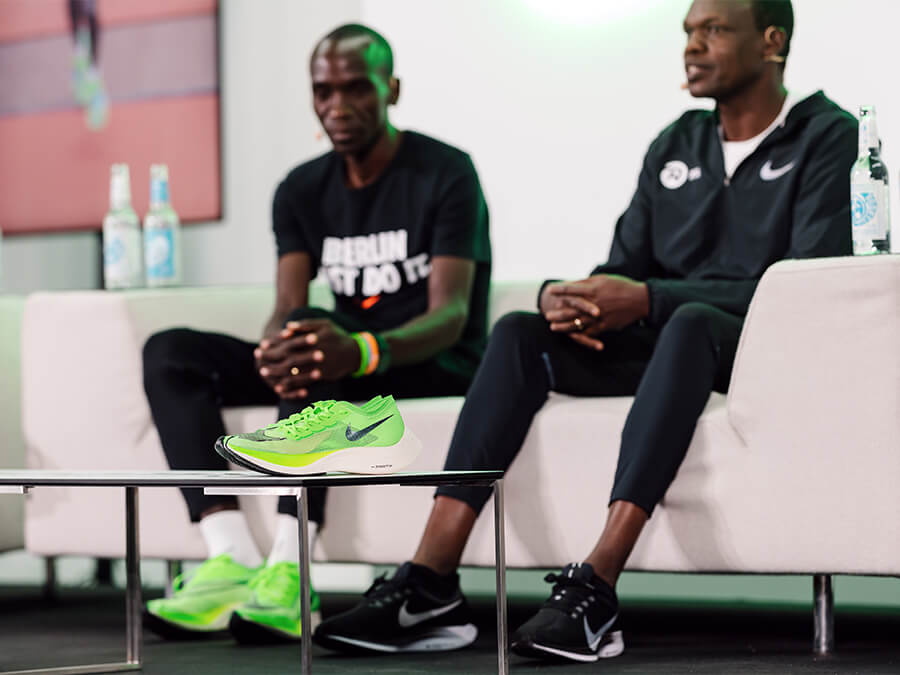 Nike athlete Eliud Kipchoge and his coach were the star guests at the panel talk. The panel was completed by Olof Sköld, CEO of Maurten, Keith Houlemard from Nike and Paul Schmidt from Charite Berlin. Eliud Kipchoge gave us impressions of his training and his lasting motivation for running at the limit. It was nice to hear that these are the same things that drive us amateur runners. 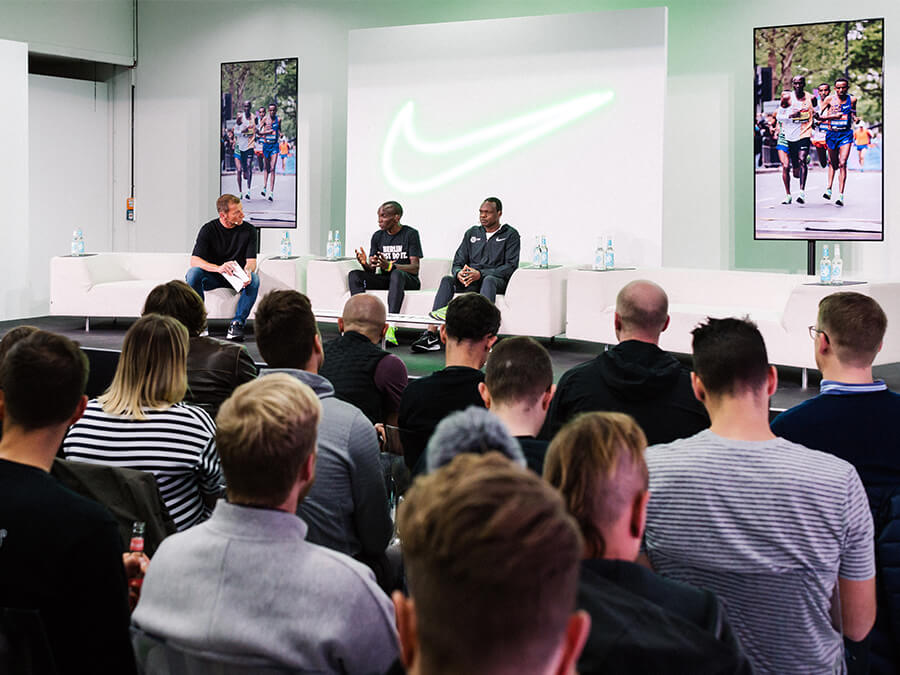 Nevertheless, what stood out most in his statements was his down-to-earthness and the permanent drive to become better.

"I don’t compete to people, I compete to distance and time" - Eliud Kipchoge

Of course, Eliud Kipchoge's previous running shoe, the Nike Vaporfly 4%, is also connected to him. To coincide with the London Marathon, Nike presented the latest generation of the fastest marathon running shoe. With the new Nike ZoomX Vaporfly NEXT%, Eliud Kipchoge crossed the finish line first in London 2019 in 2:02:37 hours. But what's new about the coveted running shoe?

Nike has tweaked a few things for an even faster running experience. It has 15% more ZoomX in the midsole for more forward propulsion. The outsole has been completely revised in consultation with running athletes and offers more grip. This provides sufficient grip, especially during high-speed turns and in wet conditions.

Nike uses the new Vaporweave material for the upper, which is very flexible and does not absorb any liquid. This means that the weight of the running shoe does not change even in heavy rain. The lacing has been moved slightly outwards to relieve pressure on the instep. 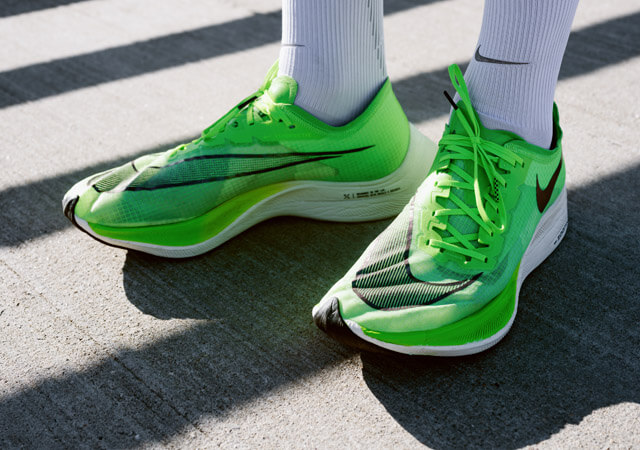 * The actual price may differ from the one indicated here. It depends on current offers and the model.

NIKE LOOKS 4 YEARS INTO THE FUTURE WITH THE FLYKNIT RACER