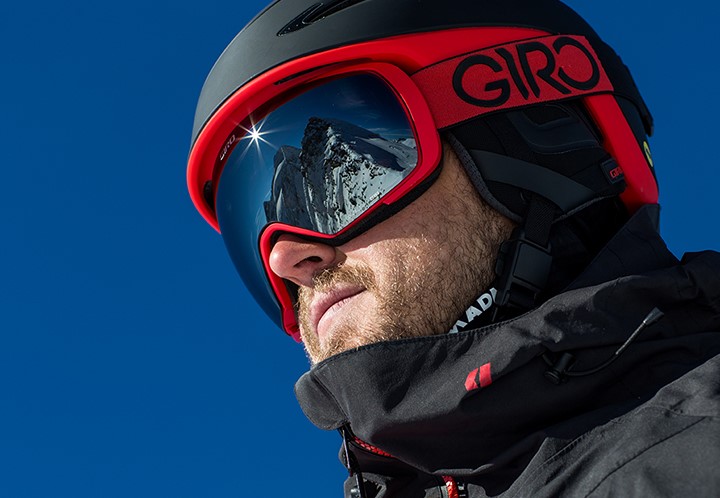 Your safety is very important to us, which is why we've teamed up with Giro, a brand that quite expertly manufactures helmets and goggles. In this post we want to introduce you to our new partner. Jim Gentes founded Giro in 1985 with the aim to look at different design possibilities of helmets and improve their performance. Giro has celebrated many successes in the cycling world thanks to the brand's new ideas and developments. The helmets became lighter, more aerodynamic and more robust. Giro made the most of these innovations and created a winter sports helmet in 1999, but it still took a while before everyone on the slopes wore a helmet instead of a beanie.

In 2004, Giro decided to delve into the new field of sports goggles. The brand soon succeeded in this category too, especially with ski goggles. Giro's "Manifest" were the first mainstream goggles to hit the market that had a so-called lens-interchange system. This system made it easy for consumers to switch between different lenses and visors. The brand Giro constantly aims to improve its helmets with new technologies and materials - one of the results being the latest achievement: Giro MIPS.

MIPS stands for Multi-directional Impact Protection System and it is made up of three main elements: the outer shell, the inner shell and the elasticated connecting membrane between both shells. The system allows the helmet to move around the head slightly during impact, distributing the consequent pressure more evenly and absorbing some of the shock, thus protecting the head even more. The idea behind this came from looking at the construction of a human head, which has a similar system. The brain is not fixed on to the inside of the skull, but rather it is enveloped in elasticated connective tissue and liquid, allowing the head to move slightly around the brain and protect it by distributing impact. This means that helmets with MIPS are ideal for any kind of skiing, be it "normal" skiing on the piste, jumping in the fun park, downhill skiing or freeriding. We now have MIPS helmets from Giro in our range, check them out and stay safe during your next skiing trip!

FOR AN UNFORGETTABLE EXPERIENCE - TOP-QUALITY FUNCTIONAL UNDERWEAR BY FALKE

A BIODEGRADABLE SPORTS SHOE FROM ADIDAS