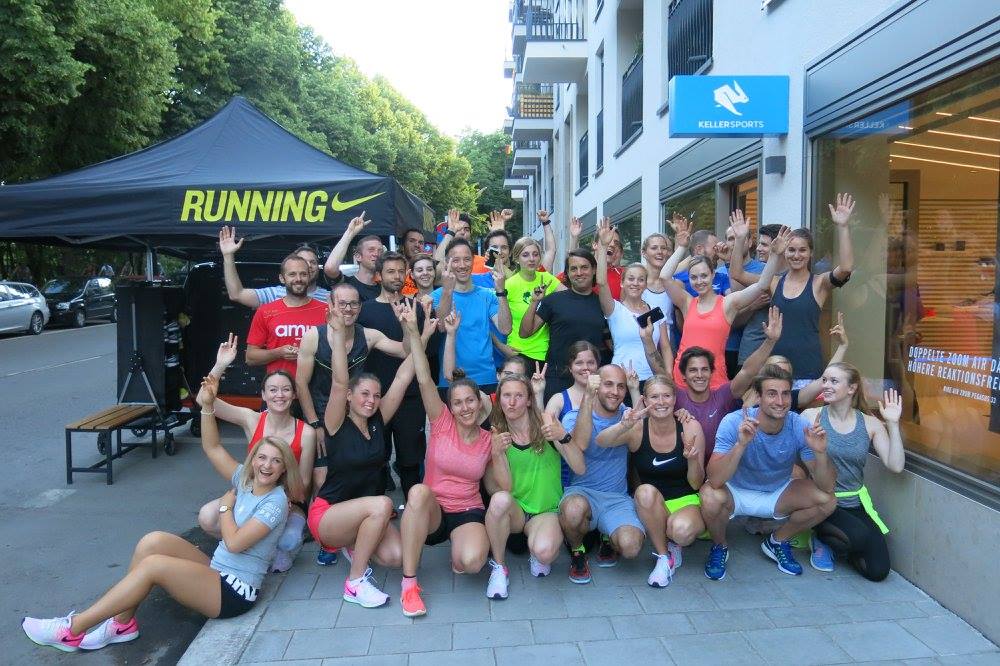 The biggest highlight of the last Isar Run by Keller Sports was meeting and running with Nike sportsperson Fabienne Kohlmann. The track and field athlete is currently one of the best female 800-metre runners in Germany; this week she will be participating in the European Athletics Championships in Amsterdam, and in August she is taking part in the Rio Olympics. During this Nike event the Isar Run group was very eager to take a peek into the world of professional running. After a short interview, she and the Isar runners set off from our new Keller Sports store to run along the Isar. The event was supported by our partner Nike, who provided test shoes like the Nike Air Zoom Pegasus 33 from the current collection.

In a short question and answer session Fabienne told the runners that she has been participating in competitions since she was a child. Her parents were athletes, so Fabienne accompanied them to the sports grounds from a young age. She started off with regional competitions and took it from there, until this year she finally managed to qualify for the European Athletics Championships and the Olympic Games. Her aim in the Olympics is to reach the semi-finals, at the very least. Apart from her sports life, Fabienne studies Psychology at the Munich LMU and, as LMU is partnered with the German Olympic Sports Association, the university has the necessary facilities to allow her to train and take part in competitions while she studies.

The athlete trains with other runners at the Olympic grounds in Munich. She said the sports group is very good and delivers great training that motivates and supports her. Even when not training, Fabienne spends a lot of time with her sports comrades. Apart from sports, Fabienne strongly values a sensible and balanced diet. Her focus lies more on when she eats, rather than what she eats. When it comes to competition days she has a particularly strict eating schedule because she works it all around her start time.

SCARPA: A TASTE OF DOLCE VITA

3 EASY WAYS TO GET FIT