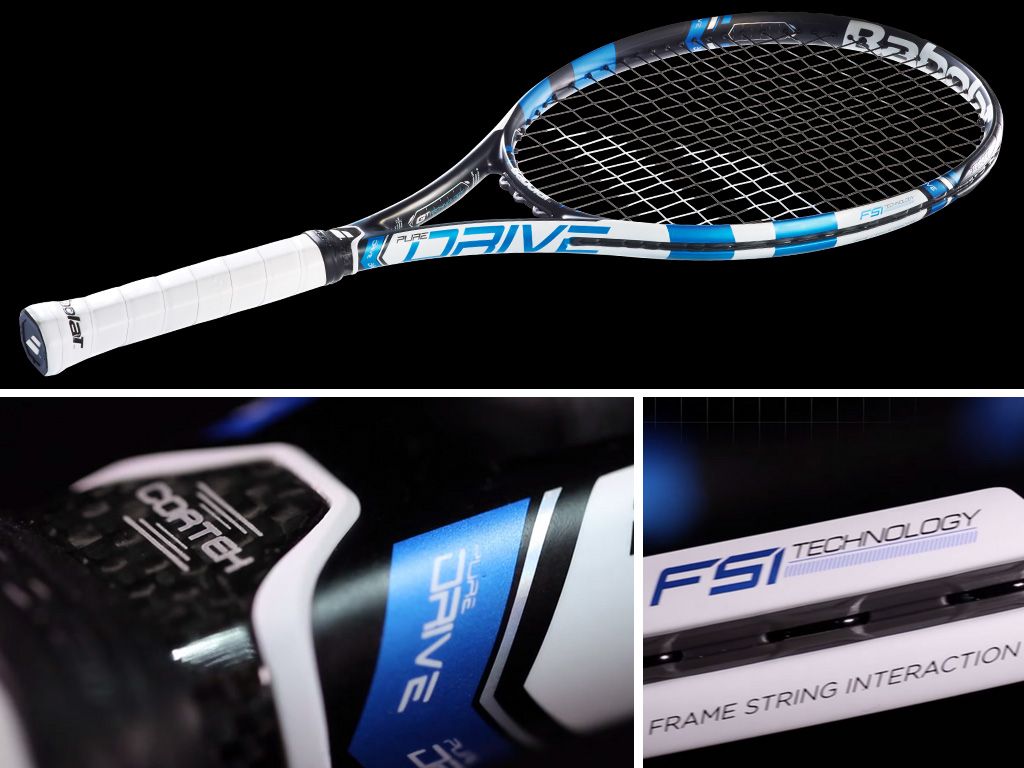 At the end of the year, Babolat are bringing the latest edition of a true classic on to the market: the Pure Drive racket series. The Pure Drive racket series is probably the most popular and most frequently sold on the tennis scene. For many, this tennis racket is the epitome of power on the court – it’s not called a “puncher racket” for nothing (more on this later). The Pure Drive is suitable for anyone who is looking for a racket that has high power combined with mistake tolerance and good handling. Nevertheless, you’ll naturally ask where this power comes from and what the new edition brings to the table.

After stringing, all rackets have a 16x19 string pattern, it’s time to get on the court. All of the rackets lie comfortable in your hand and feel good. I was really anxious about whether the rackets would really be as powerful as they’re meant to be. After just a few strokes I was able to take away quite a lot of feedback from the racket. I was very impressed by the racket’s improved response, the old Pure Drive series sometimes felt a bit slow. Babolat have clearly improved this with a tighter string pattern and a direct sporty feel with a stiffer frame. The unique thing about Babolat rackets, compared to others from Head & Wilson etc, is that the different series are updated every three years. Babolat invest a lot in technological development and have integrated some of these innovations into the new Pure Drive series. Therefore, they have a longer“product life”. [gallery type="rectangular" ids="6083,6090,6097"]

The new Pure Drive fits in with faster courts and player performance, true to the Babolat motto: “Play with power – Master your game”.

Truly the biggest difference – determined by the weight of the racket – is the swing weight of each individual version. It’s common knowledge that a heavier racket generates more power and also vibrates less.

Assessment: The series’ heaviest racket is suitable for powerful players, who mainly play at the baseline and impress with quick strokes, and sometimes make their way towards the net (it should be noted that their movability isn’t great). The Tour is most effective at serves, as you can get a lot of momentum behind the racket.
[gallery type="square" ids="6427,6378"]

Assessment: This classic racket, which Robert plays with, is recommended to anyone who wants a great mixture of power and control. It is a great companion everywhere from the baseline to the net, and will let you pin down your opponent on the baseline.

Assessment: We would recommend the Pure Drive Team to players who don’t have the strongest of arms, but don’t want to give up on power and play with lots of different methods.

Assessment: It’s easier to hit the ball thanks to the bigger head (and therefore larger sweet spot), but you do lose some precision.

Assessment: In combination with the largest sweet spot of the series, the ball accelerates quickly and the racket forgives mistakes very well. It is ideal for all players who have a short swing style.

Assessment: The smaller head size means that the ball must be struck with precision, but the racket does provide very good handling. The Pure Drive Lite generates the least amount of power from the series – caused by its lowest weight.

The first three rackets (the heaviest) are recommended to all players with good technique and who are able to control power. We recommend the Pure Drive Lite 107 und 110 to advanced players, free time players, seniors, women and beginners. They are very light and require less power, but this has the consequence that they “flutter”.

I really like the rackets’ new funky design, which doesn’t miss the classical Pure Drive series’ colours. We feel that the Pure Drive series is a really modern racket, because of both its design and playing feel, and it will probably be successfully developed further. With good reason, many pro players, such as Julia Görges, Dustin Brown, Fabio Fognini, Li Na and Agnieszka Radwanska, play with a Babolat Pure Drive racket, leading to 8 Grand Slam titles between them. Every player will become a “hard hitter” with this racket series and bring their opponent to despair. With that in mind: enjoy your match!

BASIC TRAINING IN AUTUMN AND WINTER