Menu Search
The voucher code has been copied to the clipboard.
330

Tourna Grip is the best selling grip tape for tennis rackets worldwide. No other grip tape gives its players a more secure grip when the game gets hot. The American manufacturer Unique Sports originally wanted to produce car cleaning cloths, but instead revolutionized tennis with its premium products. 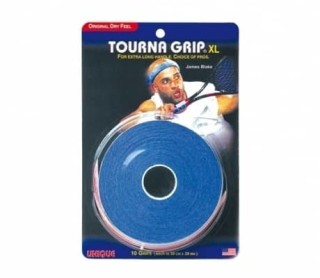 TOURNA GRIP - THE BLUE GRIP BAND OF THE TOP PROFESSIONALS

Anyone who has attended a professional tennis tournament in the last forty years, or alternatively watched a television broadcast, could always spot at least one player who had his racket wrapped in blue grip tape. This light blue overgrip was developed by the American brand Tourna Grip in 1972 - and has been an indispensable constant in the international tennis circus ever since.

In the sweaty hands of top athletes, Tourna Grip articles have been involved in some of the greatest tennis matches of all time. A list of players who prepared their rackets with the blue grip tape reads like a who-is-who of the best tennis pros of all time. Boris Becker is one of them, as are Andre Agassi, Andy Murray and especially Pete Sampras, who won all his 14 Grand Slam titles with the help of Tourna Grip products.

But why do all these top professionals rely on this one light blue grip tape? The answer lies in its incredible ability to absorb moisture. Tourna Grip absorbs sweat, especially in very hot weather, simply better than any other grip tape on the highly competitive market for tennis accessories. Its properties for sports were discovered rather accidentally. Originally, company founder Gene Niksich wanted to develop only a cheaper alternative to leather cleaning cloths for car care in the US state of Georgia in the early 1970s.

In the test phase, his special blended fabric made of cotton and synthetic fibres showed a strange peculiarity: the wetter it got, the better it adhered to surfaces. It was therefore predestined for use on the tennis court - especially since most athletes at that time still played with normal leather grips. His discovery came at the right time, just as tennis was gaining incredible popularity. This is how the family business Unique Sports, which produces Tourna Grip and is still managed by the founder sons Mike and Kevin Niksich, was able to quickly develop into the world market leader for grip bands. A status that continues to this day and also makes Keller Sports a Tourna Grip dealer.

GRIP BANDS IN THE TOURNA GRIP STORE AT KELLER SPORTS

At Keller Sports you can find Tourna Grip online - and in the Tourna Grip Sale often at very attractive prices. For example the blue classic Tourna Grip XL, which can absorb up to 350 percent of its original weight in liquid. Of course we offer all Tourna Grip articles in different packaging sizes in our Tourna Grip Shop. The grips are all extremely elastic and can therefore be wrapped around the racquet in a few easy steps. Depending on how much you sweat, a tape will last 20 to 30 hours on the court.

For players who do not sweat as much, the manufacturer Unique Sports offers the Tourna Tac as an alternative. The part of the name "tac" for "tacky" is completely justified by this tape. It is so grippy that the racket practically cannot slip anymore. The sweat absorption is hardly worse than with the Tourna Grip. And the tape doesn't get "spongy" as it sometimes happens with other "tacky grips".

GRIP TAPE FOR CHAMPIONS - OVER 100 CURRENT PROFESSIONALS USE TOURNA GRIP

Until today Tourna Grip is the most sold grip tape worldwide. Currently over 100 professionals on the Tour swear by Tourna Grip articles when it comes to a secure grip. Among them are James Blake, John Isner, Vera Zvonareva, Richard Gasquet, Sam Querry, Victoria Azarenka, David Ferrer, Kevin Anderson, Genie Bouchard, the Bryan brothers and many more. As the official equipment partner of the Global Professional Tennis Coach Association (GPTCA), the company also has a strong presence in the youth sector.

TOURNA GRIP WAS ALLOWED TO PATENT ITS BLUE COLOUR

By the way: At the beginning of its history Tourna Grip grip tapes were not blue at all, but beige - so that it looked like the other cleaning cloths for cars. Shortly afterwards, Gene Niksich had the idea with the light blue. "In the early 1970s, tennis was almost exclusively black leather straps. We wanted to stand out from this, which was of course easiest to do with colour," recalls the company founder. Not the worst idea, as siech pointed out: in 1996, the company was even allowed to patent the special color. Even then, over 50 million copies of the "blue grip, that does not slip" were sold worldwide each year.