Speed is everything. With the shoe construction of the Saucony Endorphin Speed, your steps are actively accelerated. For fast sprints, races, new best times. Find the right running shoe for new best times.

Speed is everything. With the shoe construction of the Saucony Endorphin Speed, your steps are actively accelerated. 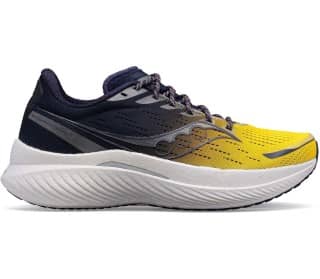 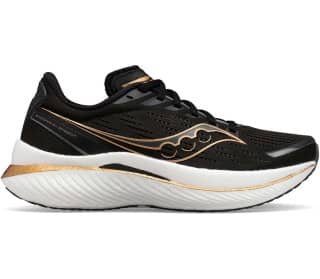 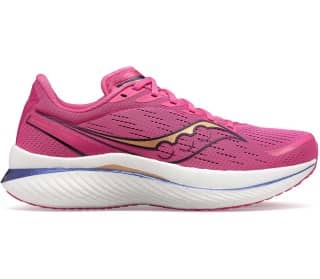 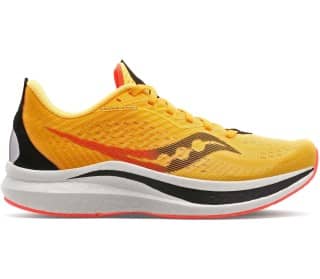 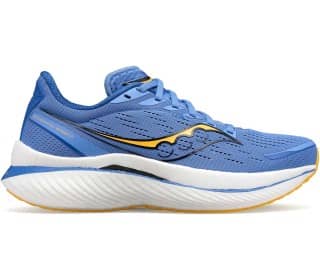 Even in the case of the Saucony Endorphin Speed, speed doesn't build up overnight. Sometimes it even comes about through purposeful slowness. So running shoe manufacturer Saucony took its time before launching its Endorphin series. For tests. For exchanges with the running elite. For input from science. Saucony researched for several years until the right formula was finally found. The Saucony Endorphin Speed then quickly picked up speed with its first appearance. Released in 2020, the shoe won several running awards in the same year, including the coveted "Runner's World Editor's Choice" award. The decisive factor was a setup that favours speed, supports the natural rolling movement of the foot, returns energy to you and at the same time provides sufficient comfort. So you can always run that extra metre. The foundation is a special construction based on a nylon plate that lets you run even more explosively. In 2021 Saucony already delivered the evolution, the Endorphin Speed 2, for which the brand optimised the upper material and also used recycled materials.

Saucony technology in the Endorphin Speed

SPEEDROLL for efficient rolling: Saucony gives its Endorphin runners a midsole construction that narrows towards the toe, which is also slightly pre-curved. Thanks to this SPEEDROLL geometry, the shoe accelerates the rolling of your foot shortly before take-off and thus also your stride.

Nylon plate for more energy: The heart of the Saucony Endorphin Speed runs along the entire length of the shoe: its nylon plate. This works in a similar way to the carbon plate that has become so popular in the running world, but returns energy a little less rigorously and is also more flexible. This makes it easier to get used to this premium running shoe. Basically, the nylon plate favours energy recovery and distributes the impact forces more evenly to the muscles, which in turn allows for a more economical movement process.

Cushioned with Saucony's PWRRUN: You also get speed with the right cushioning. Saucony has developed its PWRRUN compound for the Endorphin Speed to increase the speed even more. On the one hand, it dampens efficiently and on the other, it delivers a trampoline-like feeling that provides additional acceleration. The idea works particularly well because the brand uses a polymer construction instead of foam. This returns more energy and is also lighter. Everything for speed.

Individual fit thanks to FORMFIT: The more precisely a runner adapts to your foot, the more comfortable it will be during your run. Saucony's FORMFIT hugs your foot so closely that it almost feels as if the brand has customised your Saucony Endorphin Speed for you. It also features a lightweight, breathable engineered mesh upper.

XT-900 Outsole:. The XT-900 outsole provides the necessary grip even on wet roads and light terrain. At the same time, particularly stressed areas have been reinforced to improve durability.

Whenever you're running against your own clock or the competition, the Endorphin Speed is a great companion. The shoe is primarily made for workouts and races, accompanying you on tempo runs after work and in competitions. Even on long distances. Its nylon plate and pleasant cushioning also increase its suitability for everyday use, for example for after-work runs, for which you naturally concentrate a little less on the speed qualities of the runner.