Saucony's 120 years of expertise is always noticeable, as the company's running shoes have been praised by the trade press for a long time. In the foreground of the collective raptures: Saucony offers outstanding quality, moves close to perfection with its products and yet is never satisfied with the actual condition. Saucony running shoes are particularly recommended for the fact that they guarantee the best possible stability despite their extremely low weight. So Saucony makes you faster step by step.

Saucony's 120 years of expertise is always noticeable, as the company's running shoes have been praised by the 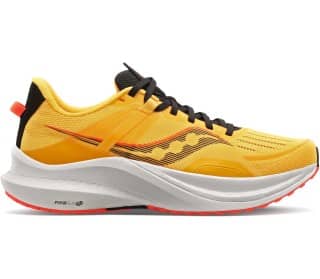 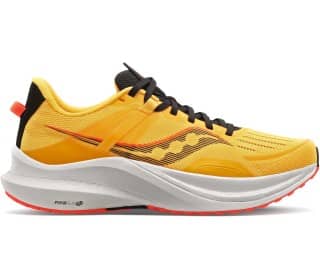 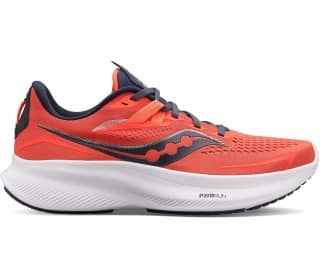 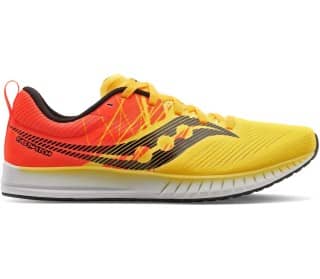 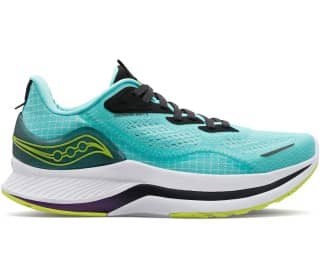 Kutztown, Pennsylvania, USA: Here, in the vistas of the East Coast, where German immigrants settled early, the River Saucony Creek also flows. Fast, 17 miles long, crystal clear. As early as 1898, a manufactory was set up on its banks, for which speed in particular was to become an elementary companion: Saucony, named after the river and meanwhile a world-famous manufacturer of running shoes and respected by running professionals. The four ambitious businessmen William Donnoyer, Thomas Levan, Walter Snyder and Benjamin Reider named their Saucony Shoe Manufacturing Company after the river for good reason: Translated from the language of the American natives the word "Saucon" means as much as "fast flowing river".

The reason for the foundation was the steadily growing enthusiasm of the people for running. At the Olympic Games in Athens in 1896, the marathon was met with enthusiasm, and one year later the Boston Marathon, still legendary today, celebrated its premiere. The actual birth of the high-quality running shoe manufactory was the fusion of Saucony and Abraham Hyde's shoe manufactory in 1968. Hyde initially produced slippers, but later also rollerblades, bowling shoes and military boots for the US Army. But Hyde had gained worldwide attention through a very special event: astronaut Neil Armstrong had been the first man to walk on the moon in the Hyde shoes in 1963. A historical event and a great deal of production expertise, which since the merger has also been associated with the name Saucony.

FROM AN INSIDER TIP TO A WORLD WIDE BRAND

The merger of the two shoe manufacturers was soon to be the first to bear fruit: Saucony caused a sensation when its products were awarded the "Best Quality Award" (1977) by a US magazine. The starting shot for a success story of a kind. At the end of the 1970s an unprecedented hype about running broke out all over the world. Many people discovered jogging and its health-promoting effect as a leisure activity for themselves. More and more even trained hard to take part in prestigious competitions.

Saucony has henceforth made it its mission to provide only the best for this rapidly growing clientele. In the 1980s Saucony was already an integral part of the roads and tartan tracks of the world and athletes achieved great success in the sophisticated footwear of the brand: In 1983 Rod Dixon set out on the so far legendary finish at the New York Marathon with Saucony running shoes on his feet he overtook his rival only 400 meters before the finishline and sprinted to victory. Today, the brand with the river giving its name in the logo has more than established itself.

You are looking for high quality and stylish running shoes? Then you will certainly find something in the wide range of Saucony products Keller Sports has to offer: We offer all Saucony running shoes for men and women and for all surfaces. For ambitious hobby runners who like to try their hand on trails off the beaten track or for professionals who are looking for the next best time in a prestigious marathon. From the US company's long runner, the "Kinvara", to the exceptionally designed "Switchback ISO", we have everything in stock. And while the first model is particularly appealing because of its particularly good damping and mobility, the Switchback ISO lies like a second skin over your feet and in the evening passes without a hitch as a trendy lifestyle model.

The "Trainer 80" is a particularly innovative model in Saucony's company history. For the first time, Saucony removed stiffer materials such as cardboard from the sole and sewed the upper material directly to the midsole. The result: a extremely lightweight, comfortable and non-slip running shoe. The innovative manufacturing process of the Americans quickly found imitators and set the standard for lightweight running shoes. Saucony continues to set trends today and stands out for its colourful and modern designs, high-quality materials and innovative technologies. No matter whether through the so-called PowerGrid-damping in the heel area or the innovative ProLock lacing system or ISOFIT, which stands for optimal fit.

RUNNING WITHIN THE DNA

"A good day is at Saucony's when we can run. It's a great day when we inspire someone else to run." This is the self-proclaimed manifesto of the running shoe specialists from Saucony Creek. But in order to win as many people as possible for running, Saucony doesn't mean it with pithy words. The manufacturer is appearing more and more as a sponsor at important running events - now also in Germany. For the Challenge Roth, the world-renowned triathlon in Germany, Saucony produced its own shoe model and since 2013 the company has also sponsored the popular B2Run company run.