The path winds over the mountain ridge, leads through the forest for a few kilometres, a little later over an open area - and you follow it. You leave roots, scree, leaves and rocks behind you. You accelerate, push yourself to the limit. Essential here: firm footing, support, effective cushioning. That's exactly what Salomon Sense Ride shoes provide. So you can concentrate completely on your run.

The path winds over the mountain ridge, leads through the forest for a few kilometres, a little later over an open ar 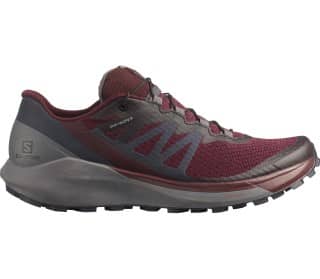 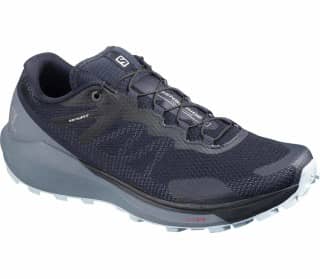 SALOMON - FROM THE FRENCH ALPS TO THE TRAIL

Whenever François and George Salomon walked through the streets of their hometown, they saw two things. First, they looked out over water, then at high, often snow-covered mountain peaks. In the middle of the French Alps, Annecy had understood relatively well how a town at the foot of several multi-metre peaks could best dress itself up. The Salomon family had also understood. They took advantage of their town's exposed location and set to work in the backyard of their house.

The three of them began producing ski edges in 1947. Salomon's birth. The family founded Brand, but didn't stop there for long. Salomon tinkered. Salomon invented. Salomon grew. In 1957, Brand launched the first ski binding, replacing the leather straps that had been common until then. This was followed by skis, ski boots, cross-country ski bindings, snowboard boots - in fact everything you need for winter sports.

"I'm fascinated by what I'm going to do tomorrow," George Salomon once said, and it was this curiosity that gave rise to the innovative drive of the brand he once founded with his parents. The fascination of the unknown. Salomon was gripped by it, the brand had left its mark on him. Lastingly. Because in the middle of the 20th century, looking at French mountain peaks, no one suspected that Salomon would one day also make itself comfortable in the running sector and develop innovative running shoes. Nevertheless, it happened. With its Sense Ride line, the brand took trail running to a new level of comfort.

As a brand, Salomon sees forest trails, downhill runs, nature as a playground. Enjoying together, staying authentic, challenging yourself outdoors is the company's motto. And that's exactly where Salomon Sense Ride products come in. Their cut is designed for running over uneven terrain, giving you both support and enough room for manoeuvre, a pleasant running feeling. This is complemented by effective cushioning and a comfortable upper that doesn't skimp on comfort even on longer runs. At the same time, the sole grips all surfaces. So your focus doesn't wander too intensively in the direction of your footstrike. Instead, you concentrate on nature, your own performance, and let off steam on the playground. Salomon Sense Ride products focus on the essentials: your run and the trail.

Salomon Sense Ride products direct their focus specifically towards the trail. They are prepared for this. That's where they feel at home. When running over uneven trails, sometimes leaves, sometimes damp branches, grip is of course crucial. Salomon Sense Ride items therefore use Contagrip MA, an outsole that gives you both durability and intense grip in different conditions.

At the same time, the Vibe midsole protects you from unhealthy impacts, while the EndoFit sleeve hugs your foot tightly for a snug fit and intense support. Salomon doesn't forget about looks either, giving its runners upbeat colours and sleek designs, making them look so elegant that they even work in urban environments. Trail running at its best, that's exactly what you get at Keller Sports. In our Salomon Sense Ride Store you can find Salomon Sense Ride shoes online - including all the innovations that make your run easier.

EXPERIENCE FROM ULTRA AND SKYRUN

As an overall brand, Salomon has set itself a very specific goal: Everyone who uses the apparel for their outings - whether top athlete or recreational athlete - should take the best possible product with them on their adventures. That's why, as your personal Salomon Sense Ride retailer, you get shoes that not only support your top performance, but have also already proven themselves under the most extreme conditions.

Salomon has recruited some of the best ultra and skyrunners on the planet for its running team. Kilian Jornet, who finished 2nd in the Ultra Trail du Mont Blanc in 2017, is one of them, as is Courtney Dauwalter. The latter ran the fastest time ever achieved by a woman at the same competition in 2019. Both are equipped with the best Salomon Sense Ride articles - you, in turn, benefit from the experience of the pros.

When you hit the Salomon Sense Ride, technology alone is not enough. The Quicklace system for fast, tight lacing, the OrthoLite® insole for comfortable cushioning or the SensiFit for a fit that borders on tailor-made are of little use if they only last for a few runs. That's why Salomon Sense Ride makes a promise, or more precisely a promise of quality. If the shoes fail after two or three years, you get a new pair. So you are always well equipped on the trail.