Moon Boots are one of the design symbols of the 20th century. The warming cult boots were created by Giancarlo Zanatta, the idea for them was the result of an event of the century. The Italian was inspired by the landing on the moon in 1969. His "elephant feet" not only quickly won the hearts of après-ski lovers, but also stormed the world market in flight - still today with ever new, modern variations - and always warm. 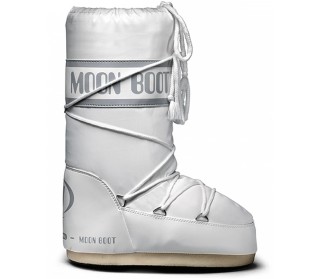 On 20 July 1969 Neil Armstrong, Michael Collins and Buzz Aldrin left the Apollo 11 spacecraft to set foot on the moon. The imprints left by her space boots became the first human autograph in space - a historic moment. Millions of people watched the spectacle on their screens at home. One of these spectators was Giancarlo Zanatta. The young businessman from the small Italian town of Montebelluna was just on a trip through the USA. He attended an event in New York's Pennsylvania Station celebrating the moon landing. Photos of the three astronauts in their space suits were everywhere. Giancarlo Zanatta was inspired by the design of her strange-looking shoes, which had the task of counteracting the lower gravity on the moon.

Back in Italy he designed his legendary shoes, which could only bear one name: Moon boat. His prototype was a pair of "elephant feet", where the left one looked like the right one, and for which his father declared him crazy. And yet numerous shops immediately became Moon Boot dealers: 6000 pairs were sold in the very first year, 20,000 the following year, then 40,000, then 100,000 - until the stormy demand of the Moon Boot Sale necessitated the construction of a new factory building for his company Tecnica, which his father had founded in 1960. And the success story continues. Moon Boots, online or in store, have sold over 25 million units worldwide to date.

The unmistakable shape, which is both ergonomic and practical, first became a hit on the ski slopes and then even an international symbol of Italian design. Moon Boots are made of plastic on the outside and are foamed or padded on the inside. The plastic sole is waterproof, very durable and non-slip. To date there are more than 100 different shapes, colors and designs: nylon or leather surface. Single-coloured or multicoloured. Matt or shiny.

High or half high. The original Moon Boot became one of the greatest commercial successes in the history of the renowned Tecnica Group, which thus became one of the most important players in the sports fashion industry and today unites the companies Blizzard, Nordica, Lowa and Rollerblade under its roof. And the company is still in family hands today: Giancarlo's son Alberto Zanatta is now acting as Tecnica President.

The best of Moon Boot products: They guarantee warm feet and therefore great outdoor experiences! After all, in winter there is hardly anything more beautiful than a walk through the snow in waterproof and comfortably warm shoes. The tight lacing and the non-slip treaded sole of the cult snow boots protect you absolutely reliably against ice and snow - and convince us as Moon Boot dealers. It has long been impossible to imagine a skiing holiday without the Moon Boot. Whether wide or narrow feet, the winter boots hold in every situation. In our Moon Boot Store you will find both the iconic après-ski model and the fashionable Monaco Low version with its shortened silhouette and warm fur.

PURISTIC OR OPULENT - WITH MOON BOOTS YOU HAVE THE CHOICE

While the Moon Boot almost disappeared during the 1980s, the classic is currently experiencing a real revival. After over 50 years, winter boots are more popular than ever among athletes, stars, fashionistas and fashion bloggers. The Moon Boot models for women impress with their variety of colours and designs: whether puristic in white or black or opulent with fur trimmings or in metallic shades - the space boots not only keep women's feet warm through the winter, but also guarantee perfect grip for men thanks to the rubber outsole with profile.

Two world-class museums have already analysed the cultural and historical significance of the Moon Boot in major exhibitions. In 2000, the Louvre named him one of the "100 most important design objects" of the 20th century. And in the MoMa exhibition "Items", the boot was one of 111 objects from fashion and design that, according to the curators, have shaped the world. "On the occasion of the exhibition, our entire family traveled to New York, and my father showed us exactly where he saw the astronauts' poster at the time," Zanatta said in an interview. By the way, the MoMa even integrated the Moon Boots permanently into its collection afterwards.