Menu Search
The voucher code has been copied to the clipboard.
2248

The wide snow carpet does not reach all the way into the valley. A few hundred meters below you, massive rock walls push it together to corridor width. Relaxed carving, abruptly replaced by the demand for tight momentum. Manoeuvrability is called for. Okay. Because K2 skis are precisely tailored to freerides, to the change from long turns and tight curves. Stability meets agility. Traditionally, the American brand equips you with innovative high-tech material - also for ski touring, downhill skiing or freestyle. 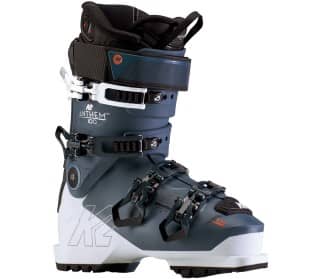 K2 - PIONEERING WORK IN THE SHADOW OF CANADIAN ROCKIES

Snow is rarely lacking at 8,611 metres. Nevertheless, K2, after Mount Everest the second highest mountain on the planet, is not necessarily considered a ski paradise. Lift facilities are missing. Downhill runs are neither prepared nor particularly relaxed to master. And so it took until 22 July 2018 before Andrzej Bargiel was the first person ever to ski down the K2 from the summit to the valley. Pioneering work and parallel to the company of the same name. Even more than half a century earlier, the combination of skis and K2 had broken new ground, albeit in a completely different way. Vashon Island, Washington State.

Right here, near Seattle, the fire K2 was started in 1962. The idea: to produce new, innovative skis for excursions to the nearby Canadian Rockies, to the Alps, on the (freeride) slopes of this world. The brothers Bill and Don Kirschner, the founders of Brand, chased after this idea - and did pioneering work on their way several times. For example, K2 was the first manufacturer ever to develop glass fibre skis, thereby reducing weight while at the same time increasing elasticity. The brand launched its first snowboards in 1987 and developed K2 products especially for women from 1999 onwards. Also a novelty.

K2 ARTICLE: A TECHNICAL MANIFESTO FOR THE SKI INDUSTRY

Nature and your skills take a decisive part, K2 products the rest. That's what the fire wants. She has set herself the goal of giving you the best possible equipment for your ski tours, descents and freeride excursions. You should be able to push yourself and always know the best material under you. In return, K2 constantly refines its shapes, tests and introduces new materials. This in turn improves the skiing characteristics of the K2 skis, makes it easier for you to take a turn and hold both on groomed slopes and on untouched deep-snow slopes. Because K2's product range is by no means exhausted with skis alone.

The brand also has high-tech ski boots in its portfolio, thus supporting the transfer of your power to the skis in order to offer comfort and support at the same time. The driving force is always the innovative spirit of the brand, which also has its very own technical manifesto. Developed in 1988, K2s Triaxial Braiding is still used today. Despite all the innovation, in the end no one has developed a better process than K2 to combine a wood core and fibreglass. Flex and swing at their best, with maximum stability and low weight at the same time. A stroke of genius.

Whether ski or boot, for the piste, the deep snow or the tour - in the K2 Shop at Keller Sports you will always find the right high-tech companion for your ski adventure. Thanks to the Powerlite Shell, the Brand's boots are pleasantly light, while the four TPU variants with different stiffness and optimally designed side walls provide exactly the lateral stability you need. It goes without saying that you will get enough power on your skis despite saving weight. And of course the boards, like all other K2 products, combine the most innovative technical characteristics. The Mindblender, your play equipment for slopes, freerides and moguls, gets the optimal balance of flexibility and stability through its Torsion Control Design.

The K2 Ski gives you a direct entry into the swing and provides a smooth turning behavior. Thanks to Ti Y-Beam, the skis also have stability at the rear end and power directly under the boat. Touring models such as the Talkback or Wayback are again based on the Paulowina Core, providing flexibility and agility. In addition, there is a perfectly balanced ratio of low weight and power transmission. Best conditions. Especially since Keller Sports offers you an enormous selection of products from K2 online. From the high-tech skis of the American brand, to touring skins and wonderfully light boat innovations, our K2 Shop offers everything you need for intensive descents.

You specify the discipline, we deliver the equipment as your K2 dealer. The Brand's innovations fit the freeride as well as the tour, the prepared downhill run as well as the mogul slope. You will find the right ski for every winter sport. Especially since K2 itself has been on the road with the best on the world's peaks for decades. Once World Cup legend Bode Miller dominated on waisted K2 boards at the US Junior Championships, today the brand likes to move in freedom. Freeride and freestyle are the order of the day - and K2 is equipping big names like Karl Fotvedt, Amie Engerbretson or the two-time X-Games silver medalist Kai Mahler. The latest developments and the best technology are a must. Your luck. Because what K2 gives the pros on the slopes, you also get for your excursions into the mountains.

K2 was not only the first brand to develop ski equipment specially tailored for women, the company is also intensively involved in women's snow sports. In 2000, it founded the K2 Women's Alliance, which specializes in the development of new innovations tailored to women. Through the alliance, K2 is also creating a community to bring together women from all corners of the planet in snowboarding and skiing.