To bring together high fashion and high-tech sportswear requires balance. Styles should stand out, theoretically find a home in Paris or Milan, and at the same time be comfortable to wear. The fabrics have to meet the demands of function, but must not be too sporty. adidas by Stella McCartney balances this tightrope act so unerringly, as if the brand were running a relaxed after-hours run over wide, asphalted paths. Paris fashion meets Herzogenaurach sportswear art.

To bring together high fashion and high-tech sportswear requires balance. Styles should stand out, theoretically find a 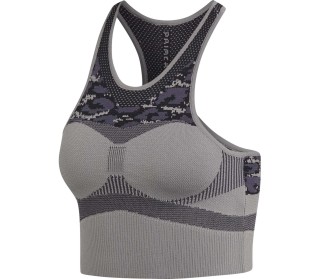 STELLA MCCARTNEY - FROM LONDON AND PARIS TO HERZOGENAURACH

Stella McCartney's way is a work of art in itself. She carries on the legacy of the famous father without wanting to follow in his footsteps. Instead of jumping into the music business, using what father Paul built up with the Beatles, Stella McCartney channels her creativity in the direction of another art form. It should be fashion. Already at the age of twelve, she designed her first artificial leather jacket, later studied art and design in London, completed internships with famous tailors and fashion designers.

And Stella McCartney's mix of clear designs, a focus on femininity and natural self-confidence mad a big impression. Even Chloe called. Just two years after graduating, McCartney took on the post of creative director of the famous Paris fashion house - and four years later, despite all her success, she broke new ground. It was to be her own. Stella McCartney founded her own brand, but kept her openness for other projects. Partner joys instead of individual sacrifice. Herzogenaurach instead of Paris. In 2004 Stella McCartney teamed up with adidas to launch the adidas by Stella McCartney line together?

THREE STRIPES FOR ONE FASHION ICON: ADIDAS BY STELLA MCCARTNEY

Highly decorated designer meets legendary sports brand. Promises of success spoken out. Promises of success kept. Fashion and sport merged - with which adidas followed a kind of dearly felt passion. The success story of the brand from Herzogenaurach began with the first big exclamation mark as the outfitter of the first German world champion team in 1954. Innumerable chapters were added over the decades on and off the fields, courts and racecourses. adidas passionately combines sportswear and street style. Run DMC brought the Superstar directly into pop culture.

To this can be added legendary collaborations, not least the Ultraboost, which oscillates between sport and fashion with sovereignty. This is exactly where adidas by Stella McCartney comes in. The star designer brings adidas' styles even more fashion appeal. High fashion for the daily workout, the yoga session, the run, the tennis match. Of course, the three stripes are always there: adidas' iconic logo is also part of the permanent inventory when the brand works together with a star designer. A central message is obligatory for every adidas by Stella Mc Cartney: the brand is aimed directly at women and wants to support and encourage them in a positive, sporty approach.

Stella McCartney uses adidas' know-how for her collections and the brand's innovative materials and technologies to interpret them for the fashion world. The star designer gives the Ultraboost, whose groundbreaking Boost damping efficiently transformed shocks into energy for an explosive step, an unmistakable design. She tailors her training jackets as if they were waiting to perform on the catwalk in Paris, Milan or New York, but doesn't forget the function.

With her start Stella McCartney promotes the fashionable approach into the middle of the sports world. Recreational athletes wear the relaxed, stylish designs at yoga, while running, their workout or for tennis. But also top athletes like to slip into the mix of high fashion and high tech. Stella McCartney designed the official outfits of the British team for the 2012 Olympic Games and repeated her design art in 2016. Some of the planet's best tennis players, including Angelique Kerber, Garbine Muguruza and Dominic Thiem, have also been rushing about the planet's biggest courts in adidas by Stella McCartney articles.

Sustainability plays a crucial role for both Stella McCartney and adidas. Both are aware of their ecological and social responsibility. Both are therefore looking for ways to make fashion even more sustainable - and find them. For Wimbledon 2019, adidas by Stella McCartney created an entire collection of recycled plastic and clothing. The brand also used Dope Dye Technology, which saves water by feeding pieces early in the manufacturing process. Alexander Zverev, Angelique Kerber, Stefanos Tsitsipas and Caroline Wozniacki were among those who contributed to the sustainable styles.