With the adidas SOLARBOOST, the company from Herzogenaurach promises maximum impact protection for the joints with almost optimal energy recovery. Finally, the Boost damping is perfectly optimised for your run. The adidas SOLARBOOST perfects the revolutionary and proven cushioning technology with a high-tech upper, additional stabilising elements and a grippy outsole. What more could you want from a running shoe?

With the adidas SOLARBOOST, the company from Herzogenaurach promises maximum impact protection for the joints with almos 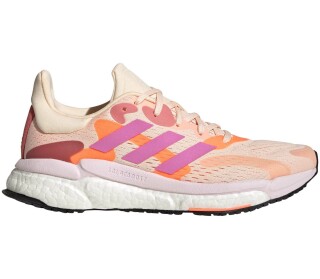 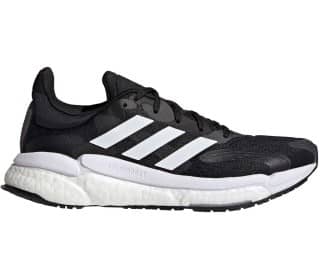 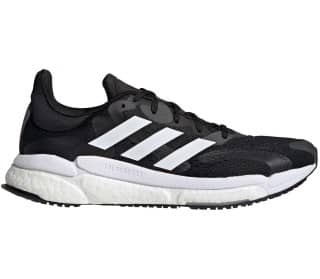 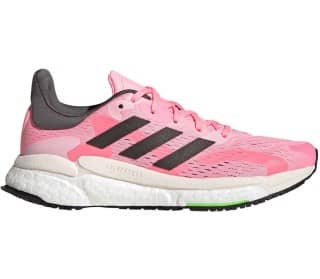 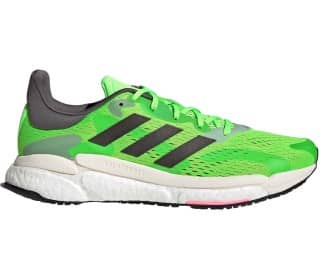 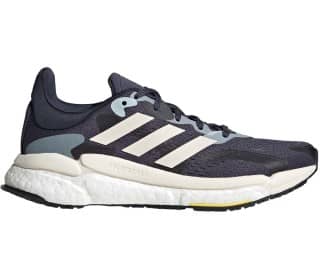 The story of the adidas SOLARBOOST

In the beginning there was cushioning. Also in the adidas SOLARBOOST. It even took over the revolutionary leadership. With the presentation of its Boost technology in New York in 2013, adidas opened eyes - and steered cushioning development for runners in a whole new direction. Storing energy in order to return it to the foot for even more speed was a familiar concept. But the emphasis of Boost damping was not. Their setup. Its efficiency. All this opened up new perspectives. Especially since adidas also gave its damping revolution the Energy Boost shoe to go with it.

It had to be performance from the sole to the cushioning to the upper. The basis was born. The SOLARBOOST was born out of the Energy Boost in May 2018. The revolution was followed by the next stage of development. adidas created a true all-rounder whose foundation is still based on unique damping. In addition, there are stabilising elements, while seams gradually fade into the background. The adidas SOLARBOOST is now in its third generation. The evolution is progressing - but only because the damping has been put at the service of the revolution.

The adidas SOLARBOOST: Running shoes with optimal cushioning and stability

Not every shoe is suitable for every runner. Not every foot anatomy is the same. adidas has therefore crafted the SOLARBOOST into the golden mean between cushioning and neutral shoes. Even years after its introduction, Boost technology still effectively dampens the energy of your steps and returns it to you immediately. Since Boost is often a little softer than other setups, the brand also provides the adidas SOLARBOOST with a kind of scaffolding around the midsole that promises more lateral support.

In addition, there is a lightweight, breathable upper made of engineered mesh and an outsole with Continental rubber. This gives you the necessary grip even in wet conditions - without wearing out quickly. Runners have run over 1,000 kilometres in the SOLARBOOST and the outsole has easily held up. As part of adidas' Primegreen line, the SOLARBOOST is also made from a variety of recycled materials. There are monochrome and subtle colourways, as well as bright and flashy ones, so you can match the runner to your style.

Boost - and more in the SOLARBOOST from adidas

Outstanding cushioning alone does not make an outstanding running shoe. That's why adidas gives the SOLARBOOST other top innovations that make your run more comfortable, safer and more efficient.

Multidimensional balance. That's what you get with the adidas SOLARBOOST. The runner cushions extremely efficiently, gives you energy back and offers a high degree of stability at the same time. The upper is comfortable yet supportive, and the outsole is designed for running on the road. That's where the SOLARBOOST feels most at home. It doesn't matter if you're just starting to run or are already working hard on more challenging running projects. The adidas SOLARBOOST, available online at Keller Sports, is suitable for every level. You can also cover longer distances with the running shoe without any problems.

adidas equips a whole armada of its runners with the rated Boost cushioning. The adidas SOLARBOOST is therefore only the beginning, or rather the end. It is adidas' premium runner. In the adidas SOLARBOOST store at Keller Sports, we offer you a wide range of colours for this running shoe. There you will also find the runner in a Primegreen version, which is made from 100% recycled materials.

Of course, all adidas SOLARBOOST models for men and women always feature the iconic three stripes from Herzogenaurach, which skilfully enhance all SOLARBOOST colourways. If you don't want to miss out on any new versions or attractive offers around the adidas SOLARBOOST, we recommend subscribing to the Keller Sports newsletter. This way you'll always be up to date!